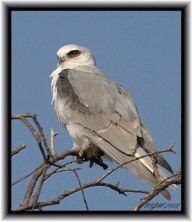 White-tailed kites, Elanus leucurus, once ranged from Georgia to Florida, across the southern United States and northern Mexico, to California and Oregon. The population was decimated during the 1800s and early 1900s. The medium sized raptor was shot as an another “chicken hawk” and for sport. In the 1920s only a remnant population of approximately 70 pairs remained, and these were in an isolated area of central California. Protection by the Migratory Bird Treaty Act, education, changes in farming practices, and introduction of the house mouse were all likely factors to the recovery of this species.

White-tailed kite egg laying in San Diego County begins in late February and may continue until late May. This species is known to double-clutch, or lay a second clutch of eggs after the chicks from the first set have fledged. The favored nesting trees are California sycamore, California live oak, and willow. The number of eggs per nest range from 3-5, with the mean for 4 eggs per clutch. The eggs are a brown mottled color and are incubated as they are laid, about two days apart.

The chicks hatch in order of when the eggs were laid, so a significant size difference can be observed for the nestlings. However, there are no reports of sibling rivalry and cannibalism, common among some raptors. Note in the photo below the much smaller chick. All four of these birds survived and fledged.

Raptors regurgitate non-digestible food, bones and fur, in the form of pellets. The pellets can be collected and the bones can be analyzed to determine prey consumed by the kites. A total of 3266 organisms were represented in 2886 pellets with Microtus californicus (84.5%), Reithrodontomys (10.2%) and Mus (4.4%) representing most of the prey. Below are photos of the three primary prey items, from left to right are harvest mouse (Reithrodontomys), house mouse (Mus) and California meadow mouse (Microtus californicus), and photos of some of the pellets and the bones from all the pellets.

White-tailed kites use optimal forage theory strategies in at least two respects, optimal choice of diet and strategies to exploit patchy habitat and prey. Kites are also a species of landscape, much like bears in that they utilize a wide range of habitats to obtain their food and meet their needs. During the non-breeding season white-tailed kites use communal roosting sites as communication centers for finding prey hot spots. This is a strategy that allows for predators to locate and exploit temporary or unevenly distributed prey. The mechanism, local enhancement, involves the chance finding by one bird of an abundant food source to which others of the species are attracted and benefit. Bald eagles and kittiwakes, among other species, use this technique, and may explain why they have prominent white markings.

White-tailed kites’ past population decline and subsequent recovery have been closely tied to human actions. Their future is also very much dependent upon the activities of humans; habitat loss, shootings, farming practices, etc. In 1977 the California Board of Geologic Names named the canyon (where Wright first began his kite studies) after the white-tailed kite, Elanus Canyon. During the 1980s this area, with its endangered vernal pools, was developed into a housing area. Where there was once a set of canyons and weather worn rolling hills, covered with chaparral and grasses, and patches of meadow mice, there is now an Elanus Road with its middle class homes and lawns.

White-tailed kites are adaptable. They are sometimes seen hunting in the grassy areas along highways, or they locate and hunt meadow mice in abandoned fields or orchards. These raptors, along with other birds of prey can survive if they are allowed to utilize the patches of habitat that remain; riparian valleys, avocado and citrus orchards, and the edges of marshes and meadows. To insure their continued survival may require development of a raptor management plan which includes the critical components for their survival such as nesting habitat, and winter communal roosting and feeding habitats; patches of moist grasslands free of chemical pollutants where meadow mice populations thrive. Regular monitoring of birds of prey populations will insure the management objectives are being met, and will allow for necessary adaptive management.