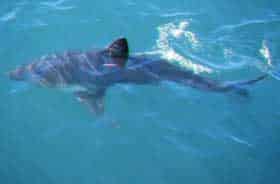 Salmon sharks (Lamna ditropis) are large, powerful, warm-bodied (endothermic), and streamlined predators adapted for high-speed swimming. Reports from the U.S. Navy have clocked salmon sharks exceeding 50 knots. This would make the salmon shark one of the fastest fish in the ocean. They are reported to reach 11.9 feet (3.6 m) in total length (Eschmeyer et al. 1983, Compagno 1984). Most of the salmon sharks encountered in Alaskan waters (the northeastern Pacific) are surprisingly uniform: over 93% are females ranging from 6 1/2 to 8 feet (2 – 2.5 m) in length and roughly 300 pounds (136 kg). Salmon sharks in the 700 pound range have been reported by sport fishermen in Alaska. The salmon shark is a member of the Lamnidae family of sharks which includes the great white shark (Carcharadon carcharias), makos, and the porbeagle shark (Lamna nasus).

Salmon sharks inhabit coastal and oceanic waters of the northern Pacific Ocean. They range from 350N to 650N in the Western Pacific, from 300N to 650N in the Eastern Pacific, and may occur as far south as Baja California, Mexico. In the Eastern Pacific the greatest densities appear to be found between 500N to 600N. They favor water temperatures ranging from 410F to 640F (50C to 180C) and occur from surface waters to over 500 feet (150m) and from coastal waters to offshore waters. There is annual north-south movement of salmon sharks in both the eastern and western Pacific. Salmon sharks inhabit Gulf of Alaska waters during all months of the year.

Salmon sharks are opportunistic predators that feed on a wide variety of prey. Their primary prey is Pacific salmon (Onchorhynchus spp.), Pacific herring (Clupea harengus), capelin (Mallotus villosus), pollock (Theragra chalcogramma), and sablefish (Anoplopoma fimbria). They have been seen taking other prey including sea otters (Enhydra lutris) and marine birds. In the photo to the left are researchers Barbara Block and Bruce Wright pumping the salmon shark’s stomach to collect diet information.

Salmon sharks are seen as direct competitors for several commercially important species including salmon, sablefish, and herring. In 1989, the abundance of salmon sharks in the northwestern Pacific was estimated to be at least 2,000,000 fish. Of these, 595,000 salmon sharks were age 5 years or older and inhabitant sub-arctic waters. The author of the paper, Nagasawa, estimated these salmon sharks could consume between 76,000,000 and 146,000,000 salmon per year. That’s about 12.6% to 25.2% of the total annual run of Pacific salmon (Nagasawa 1998).

Salmon sharks are highly migratory. The dramatic increase in salmon shark observations in some Alaska waters during the 1990’s is unprecedented. The predation effect of so many salmon sharks may appear only as random salmon run failures. Nearly every year Alaska experiences unexpected run failures. Further research may reveal the importance of these predators and the part they play in the North Pacific Ocean.