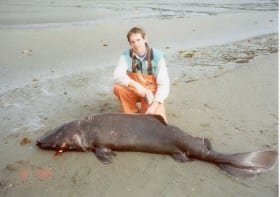 Pacific sleeper sharks (Somniosus pacificus) range from the Chukchi Sea, East Siberian and Beaufort seas, to the Bering Sea and in the Pacific Ocean to Baja California and off Japan including the Okhotsk Sea. Closely related to the Greenland shark (Somniosus microcephalus), it is one of the few sharks found in polar waters year-round. Noted for its lethargic nature, the sleeper shark is a large species generally inhabiting deep water from 780 to 6,562 feet (238-2,000m). At high latitudes and in colder water they may venture into shallow near-shore waters or come to the surface (Eschmeyer et al. 1983, Hart 1973). In lower latitudes they are mostly epibenthic (living upon the sea bed). Sleeper sharks are reported to reach lengths to 25 feet (7.6m), although average length and weight are 12 feet (3.65m) and 700 to 800 pounds (320-365kg) (Castro 1983). Eschmeyer et al. reports that the largest captured Pacific sleeper shark was 14.4 feet (4.4 m). A specimen in Kachemak Bay measured 12.9 feet (3.93m) total length.

The sleeper shark pictured above was caught in longline fishing gear set for cod and halibut.

Very little is known of sleeper shark life history. Age and size at maturity are unknown. They are thought to be ovovivparous (produce eggs that hatch within the females body), but gestation time and litter size has not been determined. Despite its sluggish and inoffensive reputation, they are voracious and versatile predators. The stomach contents of one 12 foot (3.7m) female weighed 300 pounds (136kg) and consisted of mostly rex and Dover soles. Another sleeper shark stomach contained 3 hair seals. Their diet also includes flatfish; halibut, soles, salmon, and rockfish. Other prey includes octopus & squids, crabs, and carrion (Hart 1973).

The picture above shows a chunk of harbor seal skin and attached tissue recovered from the stomach of a Pacific sleeper shark.

Above, halibut and cod that were caught on commercial longline fishing gear then attacked, bitten, and eaten by sleeper sharks.

Sleeper sharks are often caught on commercial sablefish long-line gear in Alaska with consistent catches in Prince William Sound and Southeast Alaska waters. Sleeper sharks are caught year round and tagged sharks are usually recaptured near where they were originally caught. Many commercial halibut fishermen, who have been fishing in Prince William Sound and Southeast, Alaska for years, report that sleeper sharks are more abundant and larger than in the past. Some fishermen report not catching sleeper sharks in the late 1980’s but sometime during the early 1990’s their encounters with the sharks began to increase. The sleeper sharks caught by these fishermen 8-10 years ago averaged around 4 feet (1.2m) in length, and now are averaging from 8-10 feet (2.4-3.1m) in length. Some fishermen report loses of 20-30% of her halibut catch to the sharks and often catch as many as 20-30 on one skate of gear in a 24-36 hour period.

Above is a harbor seal and sea lion with open wounds that may have been caused by an attack from Pacific sleeper sharks.

In 2004 Yves Cherel, of the Centre d’Etudes Biologiques de Chize in Villiers-en-Bois, France, and Guy Duhamel of the Museum National d’Histoire Naturelle, Paris, collected 36 sleeper sharks taken by trawlers in waters off Antarctica. The sleeper shark stomachs contained the remains of at least 49 colossal squid and eight giant squid. Sleeper sharks are proving to be one of the great marine predators.