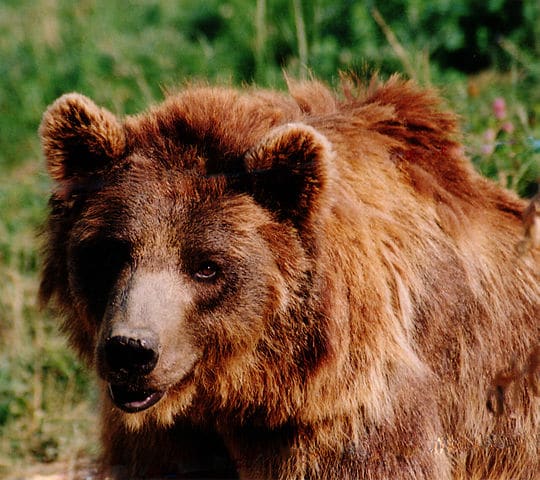 One of the things that makes Alaska so special is that all three species of North American bears flourish here. There is a chance that you may be lucky enough to see a bear. But even if you don’t, you will never be far from one, because Alaska is bear country.

Brown/grizzly bears are found from the islands of Southeast Alaska to the arctic. Black bears inhabit most of Alaska’s forests. Polar bears frequent the pack ice and tundra of extreme northern and western Alaska.

Bears are curious, intelligent, and potentially dangerous animals, but undue fear of bears can endanger both bears and people. Many bears are killed each year by people who are afraid of them. Respecting bears and learning proper behavior in their territory will help so that if you encounter a bear, neither of you will suffer needlessly from the experience.

Most bears tend to avoid people. In most cases, if you give a bear the opportunity to avoid a confrontation, it will. Many bears live in Alaska and many people enjoy the outdoors, but surprisingly few people even see bears. Only a tiny percentage of those few are ever threatened by a bear. A study by the state epidemiologist showed that during the first 85 years of this century only 20 people died in bear attacks in Alaska. In contrast, during the 10 years 1975-85, dogs killed 19 people in Alaska. Most people who see a bear in the wild consider it the highlight of their trip. The presence of these majestic creatures is a reminder of how privileged we are to share some of the country’s dwindling wilderness.

If you are hiking through bear country, make your presence known, especially where the terrain or vegetation makes it hard to see. Make noise, sing, talk loudly, or tie a bell to your pack. If possible, travel with a group. Groups are noisier and easier for bears to detect. Avoid thick brush. If you can’t, try to walk with the wind at your back so your scent will warn bears of your presence. Contrary to popular belief, bears can see almost as well as people, but they depend upon sense of smell more than their eyes or ears. Always let bears know you are there. Bears, like humans, use trails and roads. Don’t set up camp close to a trail they might use. Detour around areas where you see or smell carcasses of fish or animals, or see scavengers congregated. A bear’s food may be there, and if the bear is nearby it may defend the cache aggressively.

Give bears plenty of room. Some bears are more tolerant than others, but every bear has a personal space, the distance within which a bear feels threatened. If you stray within that zone, a bear may react aggressively. When photographing bears, use long lenses, getting close for a great shot could put you inside the danger zone.

Bears Are Always Looking for Something to Eat.

Bears have only about six months to build up fat reserves for their long winter hibernation. Don’t let them learn human food or garbage is an easy meal. It is both foolish and illegal to feed bears, either on purpose or by leaving food or garbage that attracts them.

Cook away from your tent. Store all food away from your campsite. Hang food out of reach of bears if possible. If no trees are available, store your food in airtight or specially designed bear-proof containers. Remember, pets and their food may also attract bears. Keep a clean camp. Wash your dishes. Avoid smelly food like bacon and smoked fish.

Keep food smells off your clothing. Burn garbage completely in a hot fire and pack out the remains. Food and garbage are equally attractive to a bear so treat them with equal care. Burying garbage is a waste of time. Bears have keen noses and are great diggers.

If a bear approaches while you are fishing, stop fishing. If you have a fish on your line, don’t let it splash. If that’s not possible, cut your line. If a bear learns it can obtain fish just by approaching fishermen, it will return for more.

Close Encounters: What to do.

If you see a bear, avoid it if you can. Give the bear every opportunity to avoid you. If you do encounter a bear at close distance, remain calm. Attacks are rare. Chances are you are not in danger. Most bears are interested only in protecting food, cubs, or their “personal space”. Once the threat is removed, they will move on.

Let the bear know you are human. Talk to the bear in a normal voice. Wave your arms. Help the bear recognize you. If a bear cannot tell what you are, it may come closer or stand on its hind legs to get a better look or smell. A standing bear is usually curious, not threatening. You may try to back away slowly diagonally, but if the bear follows, stop and hold your ground.

You can’t outrun a bear. They have been clocked at speeds up to 35 mph, and like dogs, they will chase fleeing animals. Bears often make bluff charges, sometimes to within 10 feet of their adversary, without making contact. Continue waving your arms and talking to the bear. If the bear gets too close, raise your voice and be more aggressive. Bang pots and pans. Use noisemakers. Never imitate bear sounds or make a high-pitched squeal.

If a brown bear actually makes contact, surrender! Fall to the ground and play dead. Lie flat on your stomach, or curl up in a ball with your hands behind your neck. Typically, a brown bear will break off its attack once it feels the threat has been eliminated. Remain motionless for as long as possible. If you move, and the bear sees or hears you, it may return and renew its attack. In rare instances, particularly with black bears, an attacking bear may perceive a person as food. If the bear continues biting you long after you assume a defensive posture, it likely is a predatory attack. Fight back vigorously.

Firearms should never be used as an alternative to common-sense approaches to bear encounters. If you are inexperienced with a firearm in emergency situations, you are more likely to be injured by a gun than a bear. It is illegal to carry firearms in some of Alaska’s national parks, so check before you go.

A .300-Magnum rifle or a 12-gauge shotgun with rifled slugs are appropriate weapons if you have to shoot a bear. Heavy handguns such as a .44-Magnum may be inadequate in emergency situations, especially in untrained hands.

State law allows a bear to be shot in self-defense if you did not provoke the attack and if there is no alternative. But the hide and skull must be salvaged and turned over to the authorities. Defensive aerosol sprays which contain capsicum (red pepper extract) have been used with some success for protection against bears. These sprays may be effective at a range of 6-8 yards. If discharged upwind or in a vehicle or airplane, they can disable the user. Take appropriate precautions. If you carry a spray can in the wilderness, keep it handy and know how to use it.

Female bears can be fierce defenders of their young.

Getting between a female and her cubs is a serious mistake.

A female bear may respond aggressively to any threat she perceives to her cubs.

In most cases, bears are not a threat, but they do deserve your respect and attention.

When traveling in bear country, keep alert and enjoy the opportunity to see these magnificent animals in their natural habitat.