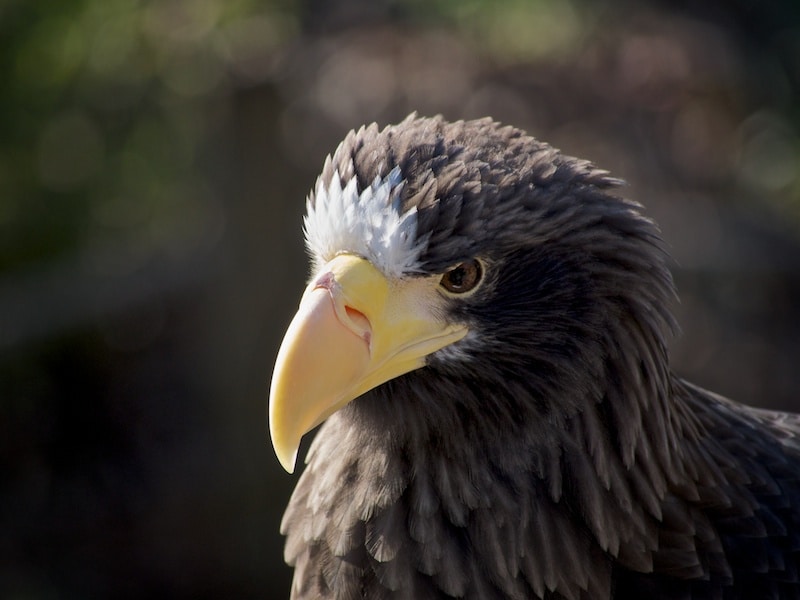 Seasonal change in habitat use in Steller’s sea eagles

By: Mutsuyuki Ueta, Michael J. McGrady, Hajime Nakagawa, Fumio Sato and Vladimir B. Masterov
Abstract
Habitat-use by Steller’s sea eagle, Haliaeetus pelagicus, was studied using satellite-tracking. Locations of eagles were classified as being in riverine, seaside, lakeside, or other habitats. In autumn, eagles mainly used riverine habitats, which was likely linked to the abundance of post-spawn dead salmon. In winter, about one third of eagles continued to be located on rivers, however, others were found on seacoasts and lakesides. In the spring migration and breeding season, habitat use by adult eagles probably reflected the variety of habitats in which breeding occurs. At that time, non-adult eagles were located mainly on the seacoast, probably in places where food supply was sufficient and there were few territorial eagles. Seven of 20 eagles that wintered in Hokkaido used mountain areas for at least some time. It is known that eagles using mountain areas in Japan in winter scavenge upon the carcasses of Sika Deer Cervus nippon killed by hunters, and are exposed to possible lead poisoning.

Steller’s sea eagle Haliaeetus pelagicus, one of the largest eagles, is migratory, having a breeding range restricted to the north and west coasts of the Sea of Okhotsk and the Kamchatka Peninsula, and a overwintering range along its southern coasts and Kamchatka and is designated by IUCN as `Vulnerable’ (BirdLife International 2000, 2001).

In order to construct effective management plans for Steller’s sea eagles, it is important to understand their use of habitat. However, as a migrant species, it is especially difficult to demonstrate their use throughout the year. In recent years, tracking via satellite has been used to better understand movement of animals, including Steller’s sea eagles (Ueta et al. 2000 and McGrady et al. in press). We used these satellite-tracked eagle data to describe their use of habitat throughout the year.

Location data were received through the Argos satellite system, which estimate location and assigns to each estimate a location class that estimates accuracy. Our analyses used only location estimates whose accuracy was calculated to be < 1 km. Individual location estimates and clusters were used to identify sites used by eagles. In places where location estimates clustered, we defined the site as the mean of those estimates. We defined the period of time that an eagle used each site as the number of days between the first and last dates on which the eagles were recorded there. A single location was assumed to represent a single day stay at that point. We excluded data from sites where PTTs were attached. Locations were classified as occurring in one of four habitat types: `River’, `Sea’, `Lake’, or `Other’, which were delineated using ONC Maps (Defense Mapping Agency Aerospace Center, USA). Locations were classified as river or lake if they were within 1 km of these features, and as sea if the location was within 1 km of seacoast or over the sea. Locations outside of these definitions were classified as occurring in `Other’ habitats. River mouths were classified as river and coastal lakes & brackish lagoons were classified as lake. The year was divided into three seasons, which corresponded to eagle behaviour rather than to calendar date: spring migration and oversummering, pre-migration and autumn migration, and overwintering. Timing of spring migration is different between adult and non-adult eagles; adult undertaking it in April and non-adult eagles in May (Ueta et al., 2000). So, for our analyses timing of the seasons for adults was somewhat different from those of non-adults. For any given season we used data only from PTTs that transmitted for at least 20 days of that season. Given this constraint, and because most birds were marked as nestlings (some of which died during their first winter) and because PTTs had a limited battery life, there were fewer data from spring migration and oversummering When referring to overwintering grounds the term `Hokkaido’ includes that island and the southern-most Kuril Islands, and the term `Kamchatka’ refers to that peninsula and the northern-most Kuril Islands. Because the exposure to potential lead poisoning in Hokkaido is greatest in the mountain areas, we also examined the use of these areas by eagles. During the pre-migration and autumn migration period, all eagles used mostly river habitats (Table 1, 2). All spent > 40% of their time in river habitats (Table 1), and 60% were located on rivers > 80% of the time. Two eagles that were tracked for more than 1 year used mainly river habitats during both their first and second autumns. One used river 65% of the time in its first autumn, then 100% in its second autumn, the other’s use of river habitats in its first two autumns was 93.6 and 100%.

During the spring migration and oversummering period all non-breeding eagles mainly used sea, however, habitat use by adult eagles showed individual variation (Table 1,2). The results indicate that river habitat is important for eagles of all age classes in autumn. At this time, the main food source for Steller’s sea eagles is dead salmon in Kamchatka (Lobkov & Neifeldt, 1986) and Hokkaido (Ueta et al., 1999), the availability of which affects the spatial distribution of eagles (Ueta et al., 1999). It seems likely that our data reflect this focus upon this plentiful, yet ephemeral supply of food.

Most eagles overwintering in Kamchatka continued to use river habitats throughout the winter, however, most eagles in Hokkaido that were initially found on rivers changed to seacoasts or lakes sometime during the winter. Same change was recorded also white-tailed sea eagles H. albicilla overwintering in Hokkaido (Ueta et al. in submitted). The change in habitat use by eagles during this time is likely a response to declining salmon availability as numbers decrease and rivers become covered by snow and ice. In northern and eastern Hokkaido, most rivers are covered by ice and the main overwintering sites of eagles are along the coast at Rausu and on Furen Lake (a brackish lagoon). On Furen Lake, eagles mainly feed upon abandoned by-catch fish discarded on the ice, and in Rausu mainly upon fish that fall from nets (WGWS, 1996). In contrast, rivers and lakes in Kamchatka have least some open water, and some of these have winter-spawning salmon, so eagles seem to continue to use river habitats in Kamchatka. Work by Shiraki (1996) in Hokkaido supports this hypothesis with winter observations of relatively large numbers of eagles on rivers that have open water with dead salmon, and few or no eagles on rivers covered by ice or snow. Also, on Kuril Lake in south Kamchatka, 650-700 Steller’s sea eagles annually winter, feeding upon dead salmon where portions of the lake and river remain clear of ice (Ladygin et al., 1991).

During the summer individual adult eagles used different habitats, but all non-adult eagles that we tracked used mainly seaside habitats. Steller’s sea eagles nest along seacoast, rivers, on small islands, lakes and in wetlands (BirdLife International 2001). Because within their breeding range, few if any adult Steller’s sea eagles are seen that are not holding a breeding territory (E. Potapov, I. Utekhina unpublished data), and because territory holding eagles forage near the nest (V.B. Masterov unpublished data), the habitat used by adult eagles during breeding season reflected nest site location. In general, the breeding density of Steller’s sea eagles is relatively low on seacoast when compared to rivers and lakes (see Ueta & McGrady, 2000), and in places may be affected by nest site and prey availability. It seems likely that non-adult eagles used primarily seacoast in summer because food may have been sufficient and these specific areas may not have been occupied by breeding sea eagles.

Although about one-third of eagles that visited Hokkaido used mountain areas, this may underestimate the real importance of mountain habitats because moves to the mountains occur in late winter (McGrady et al. 2003) and only 60% of eagles were tracked throughout the whole of the winter period. Also, our analysis may underestimate the importance of the mountains because true migration of birds did not adhere strictly to the periods we defined, so some birds visited mountain areas during the pre-migration and autumn migration period.

Until 1990, Steller’s sea eagles congregated on the seacoast at Rausu (about 90% of the overwintering population in Hokkaido) throughout the winter, and fed on cod Theragra chalcogramma that fell from fishnets (WGWS, 1996). As the cod catch declined, the number of overwintering eagles in Rausu decreased, and they dispersed to other sites (WGWS, 1996). At the same time the number of deer killed by hunters, for both sport and in an effort to control their numbers, increased from about 15,000 in 1990 to more than 45,000 in 1996 (Otaishi & Honma, 1998), resulting in an increase in the amount of deer remains in mountain areas (N. Kurosawa per. comm.). It is hypothesized that a large proportion of Steller’s sea eagles overwintering in Hokkaido may disperse from Rausu and other coastal sites to mountain areas as the winter progresses (WGWS, 1996). Our data support this hypothesis.

The Steller’s se eagles vulnerable status is due to its relatively small population size, and its restricted breeding range along the coasts and on the large rivers of eastern Russia. This work highlights the importance of the various habitats within the annual range of this species, and changes in these habitats might affect the conservation status of eagles. In addition these data illustrate the importance, in recent years, of mountain habitats to eagles overwintering in Hokkaido. This apparent change in winter foraging by eagles in Hokkaido has coincided with an apparent increase in mortality due to lead poisoning (Kurosawa, 2000). Since at least the winter of 1995-96, Steller’s and white-tailed sea eagles have suffered from poisoning from consuming lead bullets and fragments in deer carcasses, and the number of the dead eagles located increased between 1995 and 2001 (Kurosawa, 2000). Increases in mortality rate in Steller’s sea eagles, especially breeding adults, could cause population declines (Ueta & Masterov, 2000). It is important that continued research and conservation actions are focused upon the relationship between Steller’s sea eagles and their prey. In addition, although in Hokkaido, the use of lead bullets for deer hunting has been made illegal from autumn of 2000, enforcement appears to be generally lacking (K. Saito pers. comm.), and further efforts should aim to reduce exposure of eagles to the risk of lead poisoning.

Shiraki, S. (1996) Distributions of Steller’s sea and white-tailed eagles in the rivers of Hokkaido. In Survey of the status and habitat conditions of threatened species, 1995, pp. 15-27. Environment Agency of Japan, Tokyo [in Japanese with English summary].