In 2004 Yves Cherel, of the Centre d’Etudes Biologiques de Chize in Villiers-en-Bois, France, and Guy Duhamel of the Museum National d’Histoire Naturelle, Paris, collected 36 sleeper sharks taken by trawlers in waters off Antarctica. The sleeper shark stomachs contained the remains of at least 49 colossal squid and eight giant squid. Sleeper sharks are proving to be one of the great marine predators. 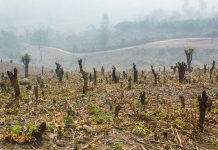 Threats to Biodiversity – What You Can Do To Help