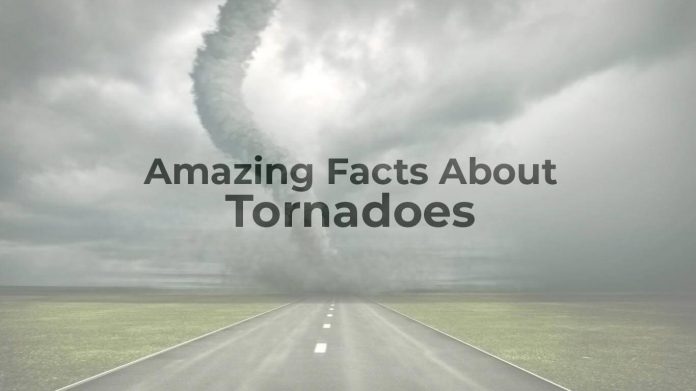 It’s another rainy day in Oklahoma, yet something in the dark, billowing clouds indicate that this storm is going to be different than any ordinary rain storm. As the winds shift, the towering cumulonimbus clouds turn deadly as violent rotating winds form a funnel and descend from the sky like a narrow twisting rope. It rages across the terrain, and at 100 mph, this destructive column of air rips through cities, hurling vehicles, uprooting trees, and destroying large structures and buildings. It’s a tornado, and the effects can be devastating to its victims. The following are extreme and interesting facts about tornadoes that can help you understand and know what to do if you ever encounter one.

What Is A Tornado And Where Does It Come From?

A tornado is a violent, funnel-shaped formation of whirling winds that extend from the clouds to the ground. It can move across the land and cause great destruction to anything in its path. This powerful force of nature is created when a warm, moist air mass intercepts a cool, dry air mass. Often, they are produced during large thunderstorms and occur most typically in the central region of the United States known as “Tornado Alley,” named for its high frequency in occurrences and covering the area east of the Rocky Mountains. What Is the Highest Wind Speed in a Tornado? The high wind speeds and spinning motion of a tornado is what gives this twister unrelenting power to rip things apart and cause so much damage. Tornadoes have been recorded as reaching speeds over 300 mph. On May 3, 1999, a fleet of storm observation trucks, called Doppler on Wheels, recorded the velocity of this raging funnel at about 318 mph. After rampaging through the suburbs of Oklahoma City and its surrounding communities for nearly 85 minutes, about 36 lives were lost and over 9,000 houses and public structures were damaged or destroyed. This devastating storm resulted in over $1 billion in damages and left its mark over 38 miles of terrain.

What Was The Biggest Known Tornado? Tornadoes are measured in size by the width they span. The largest one on record occurred on May 31, 2013, in El Reno, Oklahoma. It measured at 2.6 miles, at its peak, and tore through the rural region of central Oklahoma early in the evening. It had been part of a huge weather system that previously spawned multiple twisters over several days. This deadly storm lasted forty minutes, causing eight fatalities, 151 injuries, and nearly $40 million in damages.

When Did The Deadliest Tornado Happen?

On April 26, 1989, a tornado ripped through the Manikganj District of Bangladesh, proving to become the deadliest on record in world history. At about 6:30 pm, the twister was first spotted, tearing through the community with a path a mile wide and inflicting damages on over 50 miles of the region. The fatalities added up to 1,300 people, with about 12,000 more suffering injuries. The damages of this violent storm resulted in $1.5 million, as well as the complete destruction of Saturia and Manikganj. The deadliest twister in U.S. history occurred on March 18, 1925, with a tri-state tornado. It covered the states of Indiana, Illinois, and Missouri, with a death toll of nearly 800 people. What City and State Gets Hit by the Most Tornadoes?

The State holding the record for the most tornadoes is Florida, having reported 2,884 since 1950. Although the numbers are high, these twisters do not reach the strength or magnitude that other states endure.

The city most prone to tornadoes is the one located in the dead center of Tornado Alley. Oklahoma City experiences massive storms and has been struck by over 140 of them since 1890 when records began. Conditions for twister formations in this city are especially “ideal” during the spring months when storms are more frequent. What Month Has The Most Tornadoes? March through June marks the period, typically known as “tornado season,” when these twisters commonly strike. May appears to have the most, on average, tallying nearly 270 of them during a single season. This would be the best month for storm watchers to seek out these fierce funnels.

What Year Had The Most Tornadoes? In 2011, 360 tornadoes spawned, creating one of the largest and deadliest outbreaks in U.S. history. This record of the most occurrences in a single year broke the previous record in 1974. Within this year, an extensive outbreak featured over 148 twisters within an 18-hour period. Many were violent, and over 300 people were killed. During this “Super Outbreak,” 16 twisters were reported on the ground at one time.

What Is The Highest Elevation A Tornado Has Occurred At? The highest known elevation for a tornado was recorded on July 7, 2004. In California, a hiker was taking photographs of Sequoia National Park and captured a picture of a twister at nearly 12,000 feet. Other raging funnel storms have been recorded as occurring between 8,000 and 10,000 feet. Although they are evident, they are less frequent at such high elevations.

What Was The Longest Tornado Track? The track of a tornado is the length of its path. The longest recorded track was the 1925 Tri-State twister. Tearing through three states, it ripped a path across the terrain, extending about 219 miles in length and lasting nearly 3 ½ hours.

What Was The Costliest Tornado?