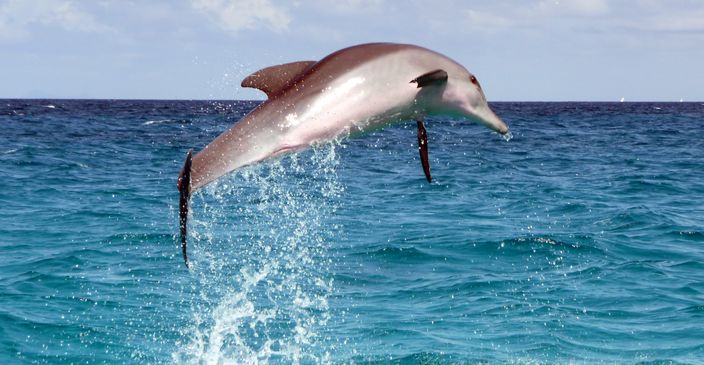 As one of the favorites among wildlife watchers, dolphins are best known for their agility and playful behavior creating a beautiful sight as they leap from the water.

Part of the toothed whale family that also includes pilot whales and orcas, dolphins are highly intelligent and sociable marine mammals that can found in nearly every corner of the globe.

Although they are one of the most iconic species of the marine world, read on to find out some of the lesser-known interesting and surprising facts about dolphins!

Did You Know?
Dolphins are very social, living in groups that hunt and even play together. Large pods of dolphins can have 1,000 members or more.

Dolphin habitat: Where do dolphins live?

Tending to inhabit shallow areas of tropical and temperate waters, dolphins can be found throughout the world in every ocean, except the coldest ones. Dolphins are only absent from 45 degrees latitude to the poles in both the northern and southern hemispheres. Most dolphins prefer to inhabit waters along the coastline and near the ocean’s continental shelf edges. However, habitat range and migration for dolphins is highly dependent on the water depth, sea surface temperature, distance from shore, and available food.

Dolphin diet: What do dolphins eat?

With a very varied diet depending on feeding opportunities and species type, dolphins mostly consume fish, squid, shrimp, and other crustaceans. Since dolphins have a compartmentalized stomach for rapid digestion, they do not chew their food and will instead swallow fish whole headfirst or breaking larger fish by rubbing them on the ocean floor. As active predators, dolphins commonly eat around four to five percent of their body weight in food each day and nursing mothers will take in even more at eight percent. Similar to bats, dolphins use echolocation to navigate the waters and hunt for their prey by bouncing high-pitched sounds off objects to listen for any echoes. Usually, the sociable mammal will hunt in groups by surrounding a school of fish, trapping them, and taking turns catching them.

Adapted for life in an aquatic environment, dolphins possess a sleek, streamlined, and spindle-shaped rounded body. Most dolphins range in coloring from gray to grayish green or dark gray on the back, which fades to white or even pink on the underbelly for camouflage from prey. Covered by a muscular flap that provides a water-tight seal, dolphins have a single blowhole on the surface of the head for breathing.

Perhaps one of its most distinctive features, the dolphin has pectoral flippers that have all of the major skeletal elements of the forelimbs on land mammals in a modified version. While the average dolphin is around eight feet with a weight from 440 to 660 pounds, the smallest can be just around 90 pounds and the largest can grow to be approximately 19,000 pounds.

Rarely seen independently, five to several hundred dolphins may live and travel together in a cohesive long-term social group known as a pod. Establishing strong social bonds with one another, behavioral studies have found that dolphins prefer association with each other and mother-calf bonds are long-lasting as the calf stays with the mother until six years of age. Dolphins enjoy chasing one another, carrying objects around, tossing seaweed, and jumping as high as 16 feet from the surface of the water. In addition to swimming in pods with dolphins of their own species, the animals can also be seen interacting with toothed whales and other dolphin species as well as riding the pressure waves of humpback whales. In order to conserve energy, dolphin pods swim alongside ships in a practice called bow-riding. Responding to sharks with both avoidance and aggression, dolphins have a tendency to attack and sometimes even kill tiger sharks in the wild.

Despite the fact that sexual maturity is variable among dolphin species, males typically reach maturity at about 11 years old and females at around 5 or 7. Since the genitals are concealed in the males and females, both sexes have a genital slit, but the females also have a mammary slit on either side. Female dolphins tend to be sexually receptive during most of the year and are generally the ones to initiate courtship for mating. Just before mating occurs, the male often rubs or nuzzles the female on the neck and exhibits an “S-curve” posture. While there is no specific mating season for dolphins and breeding can occur throughout the year, mating tends to peak in the spring or fall for many of the different dolphin species.

Depending on the species, the gestation period for dolphins can range from 9 to 17 months for full development in the mother’s womb. When it is time for birthing, females distance themselves from the pod and give birth near the surface of the water.

With twins being a very rare occurrence, dolphins usually give birth to one calf. As soon as the calf is brought into the world, the mother must quickly take it to the surface for its first breath and will nurse the calf with her own milk for at least 11 months.

Since dolphins span a very large geographic area and there are more than 40 subspecies of dolphins worldwide, it is difficult to provide an accurate estimate population, but the total global dolphin population is guessed to be around 9.5 million.

Since climate change is continuing to cause the ocean temperatures to rise, dolphins are now seeking deeper and colder waters to follow their food sources. Wildlife biologists are concerned that the dolphins will have a challenge adapting to these new feeding grounds in order to sustain the same high population levels. Dolphins that inhabit brackish waters where rivers and oceans meet are in particular danger of losing habitat due to rising ocean levels. Furthermore, dolphins are also continually threatened by whaling, accidental entanglement in fishing gear, ship collisions, toxic contamination, water pollution, oil extraction, and habitat degradation from melting ice. While some kinds of dolphin are classified as vulnerable and endangered, their popularity luckily has driven numerous monitoring and conservation projects to reverse the threatening trend to some species of cetaceans in our oceans.