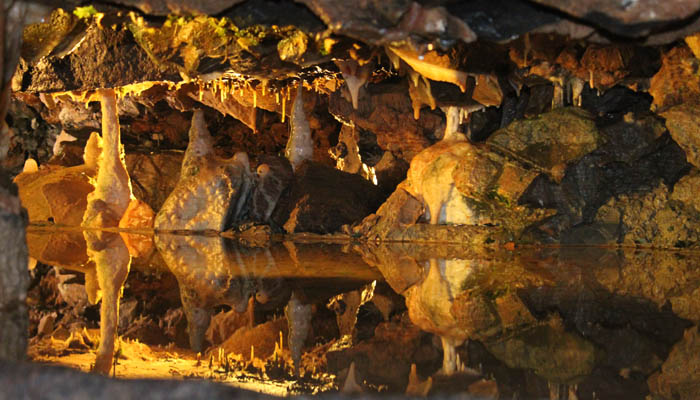 A lot of different landscapes form part of our day to day existence.  Most of us, even city dwellers, have spent time in the forest, mountains, desert, or plains.

But how much time have you spent underground, plumbing the depths of the earth?  Many people can only remember a handful of times they ever had a chance to explore a cave and see stalactites and stalagmites, and the mysterious creatures that live in a world without light.  Some people have never visited a cave.

Caverns draw us because they are mysterious, and we wonder how deep they go—how deep we could go by plunging into the dark.  They draw us back to our ancestry, when shallow caves served as shelter, but deep caves also frighten us with their smothering darkness.

Our fascination with them is clear from our films and literature.  A number of prominent horror films have been set in caves.  In fantasy literature, characters often find what they need inside a cave.  Clearly, caves have a huge impact on the collective consciousness of humanity.

Curious about the 10 deepest caves in the world?  Read on to delve into the depths of the earth and discover them.  This list is always changing, because explorers manage to descend deeper into many of these caves year after year.  A lot of these caves are former record holders which have since been displaced.  Others are still not fully explored and may extend even deeper than we imagine. This cave is located in Slovenia, and is the deepest cave in that country, descending at least 4982 feet into the darkness.  To give you an idea what that is equivalent to, divide it by 6.  You could stack 822 six foot people on top of each other, and the tallest one could wave hello to you at the top of the cave.  What is truly amazing is that the cave extends even deeper than that.  That is only as far as spelunkers have managed to plumb. This is a system of caves located in the Picos de Europa Mountains in Spain.  Spelunkers from around the world formed a team to go as deep as they could, and managed to get 4944 feet before turning around and coming back up.  There was no end in sight.

This cave is located in the West Caucasus in Georgia—one of around 400 known caverns in that region.  It is at least 4948 feet deep, making it a remarkable addition worthy of this list. This is another one in Georgia, and there is a good chance it is the world’s deepest cave.  Explorers know that it is at least 5062 feet deep.  Spelunking teams continue to explore the many beautiful caverns inside this system, and odds are they will add more depth to that measurement soon.  Whereas many of the caves on this list are shafts in the earth which plunge straight down, Sarma features many intriguing spaces to explore with some impressive formations.

This cavern is the deepest in all of Spain.  On top of that, it has the distinction of being considered by many to be one of the most technically challenging descents on the entire planet.  For any adventurer looking for a tough and harrowing journey downward into the earth, this cave will easily meet the bill.

For another technical challenge, head back to Georgia to the Illuzia-Snezhnaja-Mezhonnogo.  This cave system is immense, also located in the Western Caucasus.  There are two caves which come together here, Illuzia, which means “Illusion,” and Snezhnaja, which means “Snowy.”  The total depth?  At least 5,751 feet. Another intersection of two caves is the Vogelshacht and the Lamprechtsofen cave system in Austria.  This system is huge, and spelunkers continue to explore it.  It extends at least 5,354 feet down, but there is a good chance it is even deeper than that.  This is yet another cave system which has the potential to be the world’s deepest.

This cave in France was considered the world’s deepest for a long time, cleaving at least 5,685 feet down into the earth.  This cavern was known for another record as well.  It was not only believed to be the deepest cave, but it was also the first one which was explored more than a kilometer down.  While Gouffre Mirolda holds neither record any longer, it is still one of the deepest caves on the planet.

This is another deep one in the French Alps, extending at least 5256 feet down into the earth’s crust.  There are 8 or more entrances into the cavern, which is still being explored.  This one held the record for the world’s deepest until 1980.  It remains a very impressive cavern. The winner as it stands for the deepest cave on the planet is Kurbera-Voronja in Georgia.  This cavern has been explored more than 2 kilometers down—a brand new record for cave penetration.  It is known to be at least 7,188 feet deep.  That makes it the only known cavern extending more than 2 kilometers.  Is it the deepest cave in the world?  Maybe.  But as many of the caverns on this list have not been fully explored, there is a chance that its records will one day be displaced.

Every year, international teams continue to delve into the depths of caverns around the world.  As human beings, we are fascinated by caves, which reveal something of our past.  Perhaps part of the psychological root of our obsession lies deeper however.  Delving into the darkness of the earth makes us think of delving into our own internal depths, and what we might discover there.  With the surface of the earth pretty thoroughly mapped out, caverns remind us that there is a lot we still do not know about the planet or about ourselves.