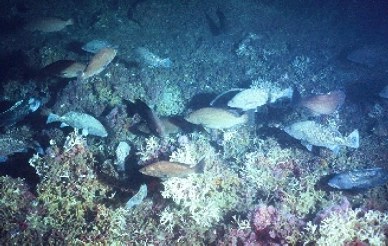 Bottom trawls are large nets which are used to catch groundfish and other commercially targeted fish and crustacean species. Bottom trawls are one of the most destructive fishing gear types because they directly threaten species richness and biodiversity, and they catch a variety of non-target, undesirable or unmarketable species. The non-target species, or bycatch, is discarded overboard often either dead or dying. In some fisheries the bycatch can be large. In the southern California spot prawn trawl fishery 17 pounds of bycatch is caught and discarded back into the water for every 1 pound of target species that is sent to market. Additionally, bottom trawls cause severe habitat damage. One of the types of habitat bottom trawls are destroying is created by deep sea corals and sponges. Every pass of a bottom trawl can crush corals, some being several hundred years old.

Deep sea coral before and after trawling.

In 2004, more than 1,100 marine scientists have signed a statement calling on the United Nations and world governments to stop the destruction of deep-sea corals. The researchers want a moratorium on the use of the heavy trawling gear that gouges coral and sponges from the ocean bottom in search of valuable fish. “Deep-sea corals and sponges are crucial habitat elements for seafloor species,” said UBC fisheries professor Daniel Pauly. “Allowing trawling in coral forests is the worst thing we are doing in the ocean today. It should be stopped immediately until scientists can determine whether trawling in the deep-sea can be justified anywhere.” “Nothing could be dumber than destroying the habitats that depleted fish populations need to recover. Governments must stop pussyfooting around and do something useful.”

Longline fishing consists of baited hooks on lines up to 80 miles long. Each longline can have more than several thousand hooks at a time. These may catch swordfish, tuna, sharks, birds, and turtles. Worldwide, an estimated 180,000 birds die on longline hooks each year, many of which are endangered and nearing extinction. About 10% of the world’s endangered wandering albatross population is killed each year by longlines. According to Bird International, in 1996, just three albatross species were threatened, but today all 21 species are at risk of extinction. A number of petrel species also face extinction, and all these sea birds are at risk as a result of longlining. Fishermen can

minimize conflicts with seabirds by putting extra weight on lines to make bait sink faster, by setting hooks at night, and by using streamer lines that scare birds away. In some areas sharks have also been severely impacted by longline fishing. In 1998, 60,857 sharks were killed in Hawaiian longline fisheries. Sharks have slow growth and reproductive rates, which makes them particularly vulnerable to overfishing (see predators).

Other destructive fishing practices include using sodium cyanide which is applied to reef crevices where fish hide. Almost 80 percent of the marine aquarium fish sold internationally come from the Philippines, many caught by cyanide fishing. Although the practice has been outlawed, and many importers refuse cyanide-tainted fish, widespread use of cyanide continues.

Blast fishing catches food fish in a flash, but it’s dangerous to fishermen,

devastating to fishes and coral reefs, and even though prohibited in most countries, still used on coral reefs in Asia, Africa, the South Pacific, and the Caribbean. A single blast can destroy thousands of years of coral growth

The increasing popularity of scuba diving has put more strain on coral reefs around the world. Divers frequently make contact with fragile corals, breaking them or damaging their fragile tissue surface, leaving them susceptible to bacterial attack and disease. Boat anchors from dive boats also contribute to the damage caused by recreational diving. Each time an anchor is dropped, 4-6 m2 of the reef surface is destroyed.

Rouphael, A.B. and G.J. Inglis. 2001. “Take only photographs and leave only footprints”?: an experimental study of the impacts of underwater photographers on coral reef dive sites. Biological Conservation 100: 281-287.

Thrush, S. F. et al. 1998. Disturbance of the marine benthic habitat by commercial fishing: impacts at the scale of the fishery. Ecological Applications 8(3): 866-879.

Watling, L. and E. A. Norse. Disturbance of the Seabed by Mobile Fishing Gear: A Comparison with Forest Clear-Cutting.

How Fisheries Can Maintain Degraded States