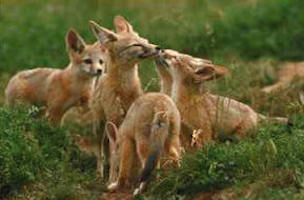 The San Joaquin Valley of California is a region of immense biological diversity, and includes a number of endemic species and unique biotic communities. California harbors more unique plants and animals than any other state, and its biotic communities also face intense pressures. With the human population of California increasing every year, there is always more and more demand on the remaining habitat. Undeveloped habitat the size of San Francisco is converted to residential or commercial use every six months.  The State of California lists 34 species of animals and 46 species of plants as having been extirpated since the 1880s. The combined state and federal lists of rare, threatened, or endangered plant and animal species in the state totals 330, and there are more candidate species identified.  One of these listed species is the endangered San Joaquin kit fox.

Federal listed as Endangered and State listed as Threatened

The kit fox is the smallest canid species in North America and the San Joaquin kit fox is the largest subspecies.  It’s a small brown fox with a light colored belly, and large ears.  The San Joaquin kit fox was listed as endangered by the U.S. Department of the Interior in 1967 and by the State of California in 1971.  The evolutionary and taxonomic relationships among small North American foxes were recently examined and the conclusion was made that of the traditional subspecies of the kit fox, the San Joaquin Valley population is most distinct and should be considered a subspecies.

Early researchers believed that by 1930 the range of the San Joaquin kit fox had been reduced by half.  They described the range prior to 1930 as including most of the San Joaquin Valley from southern Kern County north to Tracy in San Joaquin County on the west side of the Valley and up to La Grange in Stanislaus County on the east side.  No comprehensive survey of its entire historical range has been completed, but local surveys, research projects, and incidental sightings indicate that kit foxes currently inhabit larger areas of suitable habitat on the San Joaquin Valley floor and in the surrounding foothills of the coastal ranges, Sierra Nevada, and Tehachapi Mountains from southern Kern County north to Contra Costa, Alameda, and San Joaquin counties on the west, and near La Grange, Stanislaus County on the east side of the Valley.  Researchers also reported kit foxes occurring westward into the interior coastal ranges in Monterey, San Benito, and Santa Clara counties (Pajaro River Watershed), in the Salinas River watershed, Monterey and San Luis Obispo counties, and in the upper Cuyama River watershed in northern Ventura and Santa Barbara counties and southeastern San Luis Obispo County.  Another study conducted by the State of California found about 85 percent of the San Joaquin kit fox population in 1975 occurred within six counties: Fresno, Kern, Kings, Monterey, San Luis Obispo, and Tulare.  About half the population could be found in Kern (41%) and San Luis Obispo (10%) counties.

Kit fox mortality results from many sources.  Natural sources include predation, starvation, drowning, and disease.  Human induced factors include shooting, trapping, poisoning, electrocution, collisions with vehicles, and suffocation.  Loss of habitat from urban, agricultural, and industrial development are the principal factors in the decline of the San Joaquin kit since at least the 1950s.  Researchers estimated that by 1958, 50 percent of the Valley’s original natural communities had been destroyed.  The completion of the Central Valley Project and the State Water Project, that diverted and imported new water supplies for agriculture, contributed to an estimated 34 percent loss of natural lands between 1959 and 1969 so that by 1979, only about 7 percent of the San Joaquin Valley floor’s original wildlands south of Stanislaus County remained untilled and undeveloped.  Subpopulations of the San Joaquin kit fox appear to be increasingly isolated from one another due to other developments within its range including: cities, aqueducts, irrigation canals, surface mining, road networks, petroleum fields, other industrial projects, power lines, and wind farms.  These actions singly and cumulatively compress and constrict the San Joaquin kit fox into fragmented areas, varying in size and quality.  The isolation of subpopulations can lead to increased rates of extinction due to the effects of inbreeding, genetic drift, Allee effects, intra- and interspecific competition, and catastrophic occurrences in the local environment.

Human actions or natural disturbances that contribute to the fragmentation and subsequent isolation of San Joaquin kit fox populations or their habitat have the potential to move the species closer to extinction.  Kit foxes have been observed to disperse across disturbed habitats such as agricultural fields, oil fields, rangelands, highways, and aqueducts, but maintaining movement corridors to connect subpopulations remains an important goal of recovery efforts for this species.

Interspecific competition occurs between nonnative red foxes, coyotes and kit foxes.  Non-native red foxes may invade and occupy historic kit fox habitats, compete for resources, and limit recovery efforts.  Coyotes are highly adaptable to disturbed environments and may out compete kit foxes for available resources as well as kill them opportunistically.  Predation by large carnivores may account for the majority of the annual adult mortality rate observed among San Joaquin kit fox in some areas.  The coyote population on the Naval Petroleum Reserves in California was reduced in an attempt to enhance the kit fox population, but was ineffective.

Breeding occurs from December through February with pups usually born in February or March.  One litter per year, with an average of four pups per litter, is typical.  The pups remain with the parents until June or July at which time the juveniles usually disperse.  Kit foxes may be solitary from mid-summer through late fall and then occur in family groups from late fall through early summer.

The kit fox requires underground dens for temperature regulation, shelter, reproduction, and predator avoidance.  Kit foxes commonly modify and use dens constructed by other animals and human-made structures.  Dens are usually located on loose-textured soils on slopes less than 40 degrees, but the characteristic of San Joaquin kit fox dens varies across the fox’s geographic range in regard to the number of openings, shape, and the slope of the ground on which they occur.  Natal or maternal dens tend to be found on slopes of less than six degrees.  Kit foxes change dens often using numerous dens each year.  Monitoring the movement of foxes using radio telemetry portrayed that foxes use individual dens for a median of 2 days before moving to a different den.  Avoidance of coyotes has been provided as a probable hypothesis to explain this frequent change of dens.  Researchers have reported individual foxes using more than 20 den sites annually and family groups using as many as 43.  In another study, a single animal used 70 different dens over a two-year period.

The recovery strategy for the San Joaquin kit fox focuses on the collection of data on the distribution and status of the fox throughout its range.  Other areas of focus include: demographic information for foxes occupying natural, agricultural, residential, and industrial lands; relations between prey populations and kit fox population dynamics; interspecific interactions between kit foxes and other native and non-native carnivores; and the direct and indirect relations between land use practices and kit fox survival and reproductive success.