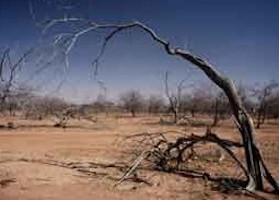 As the word suggests, the definition of desertification is: the process of an area of land becoming a desert. This typically makes it difficult or nearly impossible to live in.

Some of the causes of desertification include the mismanagement of land, such as by harvesting too much vegetation too quickly. Climate change can also be a cause when problems like drought cause vegetation to die or prevent such vegetation from growing.

Sixty million people are expected to migrate from the desert areas of sub-Saharan Africa to North Africa or Europe by the year 2020, the United Nations body responsible for stemming the spread of deserts warned on Thursday. But when they arrive they may find a drier Mediterranean region than the one that exists today. Marking its 10th anniversary, the UN Convention to Combat Desertification (UNCCD), took up the theme of the social dimensions of the drying up of formerly fertile lands – migration and poverty. Since 1990, the UN said, about six million hectares of productive land have been lost every year around the world as the land becomes degraded and less fertile. The World Day to Combat Desertification and Drought is commemorated each year on June 17. It is part of a UN led international campaign to increase awareness of land degradation.

With an estimated 135 million people at risk of being driven from their lands because of continuing desertification, the world must focus more on reversing this trend, UN Secretary-General Kofi Annan said in a statement. The Convention now has 191 signatories, and Annan says the governments of member states must cooperate with civil society, business and international organizations to promote more sustainable development so that land remains arable and does not become desert. The secretary-general says desertification can reduce productivity in some regions by as much as half. “It contributes to food insecurity, famine and poverty, and can give rise to social, economic and political tensions that can cause conflicts, further poverty and land degradation,” Annan said. Creeping desertification, particularly in sub-Saharan Africa, is inducing large migration movements as locals who once farmed in what are now arid areas seek a living elsewhere.

The UNCCD Secretariat estimates that more than one billion people and one-third of the Earth’s surface are threatened by esertifiesertification.

“It is widely recognized that environmental degradation has a role to play in considerations of national security as well as international stability. Therefore, desertification has been seen as a threat to human security,” says the Convention’s Executive Secretary Hama Arba Diallo.

He agrees with security experts gathered at a NATO workshop in Valencia, Spain last December, who emphasized desertification in the Mediterranean region as an issue of military security. In America, every year, between 700,000 and 900,000 Mexicans leave their rural dryland homes to find a living as migrant workers in the United States, Diallo points out. Many villages have been lost in China to expanding deserts, sand drifts, dune movement and sandstorms in the last few decades.

From the Central Qurnah marsh in Iraq, between 80,000 and 120,000 people are estimated to have crossed the border into Iran, and another 200,000 are thought to have dispersed throughout Iraq, becoming refugees in their own country. In Haiti, as a result of land degradation which reduced the per capita grain production to half what it was 40 years ago, compounded with chronic political unrest, 1.3 million Haitians have fled their island over the past two decades.

Among practical measures that can be taken to prevent and restore degraded land are prevention of soil erosion; improved early warning system and water resource management; and sustainable pasture, forest and livestock management. Many techniques exist such as aero-seeding over shifting sand dunes; narrow strip planting, windbreaks and shelterbelts of live plants; agroforestry ecosystems; afforestation and reforestation; introduction of new species and varieties with a capacity to tolerate salinity and dryness; and environmentally sound human settlements. The Secretariat recognizes that desertification is both the cause and consequence of poverty. Because poverty forces the people who depend on land for their livelihoods to overexploit the land for food, energy, housing and source of income, any effective strategy must address poverty at its very center. Strategies must take into account the social structures and land ownership of affected people, the UN says, as well as pay proper attention to education, training and communications in order to provide the fully integrated approach.