Any aquarium enthusiast knows that the majority of aquariums in most cities and towns fall pretty short once you’ve visited even a single spectacular one.

The best aquariums in the world offer plenty to enjoy in terms of sheer volume, but also feature exciting and informative exhibits. These aquariums not only are fascinating because they offer an opportunity to learn about the world beneath the ocean, but are also atmospheric and make a visitor feel as if they have stepped into another world. Curious what the biggest aquarium in the world is?

Here is a list of the top ten biggest and best aquariums on the planet.

The Aquadom may not be the largest aquarium in the world, but it is an impressive and unique experience. The cylindrical aquarium is located inside the atrium of the Radisson Hotel in Berlin. It is 25 meters high and has a diameter of 11 meters, and contains a million liters of water. There are over 2,600 different species living inside. You can ride an elevator up through the center of the cylinder and look out through the transparent walls. At the top there is a platform you can stand on and look out over the atrium. This aquarium contains just under a million gallons of water, and is one of the largest aquariums in all of Asia. The exhibits are divided according to geographic region (the China Zone, the Australia Zone, and so on). There are a number of endangered species in the collection. The aquarium also houses the longest underwater tunnel on the planet, measuring 509 feet.

This marine-themed park in Durban, South Africa, is home to the largest aquarium on the continent. Thirty-two tanks contain just under a million total gallons of water. The aquarium is constructed to resemble a wreck under the sea. A famous restaurant at the park has a large wall aquarium populated by sharks. The National Aquarium in Baltimore has been open since 1981, and receives around 1.5 million visitors per year. The aquarium contains more than 1 million gallons of water as well as a rainforest terrarium on the roof. There are more than 16,500 specimens living inside, representing around 660 species.

This famous aquarium is located on Cannery Row in Monterey, California, and contains two massive tanks. One of those tanks on its own contains 1.2 million gallons of water as well as one of the largest single-paned windows on earth. Turkey’s Turkuazoo aquarium opened up in 2009, making it one of the world’s newer giant aquariums. Turkuazoo is located inside the Forum Istanbul Shopping Mall, and includes not only an 80-meter underwater tunnel, but also a rainforest habitat, and a flooded forest wetland habitat. There are around 10,000 species living in Turkuazoo. The largest tank holds 1.32 million gallons of water.

This giant aquarium is located inside the City of Arts and Sciences, which is actually the name of an exhibition hall in Valencia, Spain. Inside this aquarium is the largest tank in all of Europe, containing 1.85 million gallons of water. There are more than 45,000 species of marine life represented in the L’Oceanografic exhibit. The exterior of this building features very eye-catching modern architecture, and if you’re visiting Valencia, you can’t possibly miss it. This aquarium at the Ocean Expo Park opened in 2002 and features a famous exhibit called the Kuroshio Sea. This tank contains almost 2 million gallons of water and has a massive acrylic glass panel. The aquarium is well known for its whale sharks and manta rays. Only a few aquariums in the world offer visitors the chance to see whale sharks—large and majestic animals that require a great deal of space to thrive.

You didn’t think Dubai would sit this one out, did you? The Dubai Mall is already one of the largest shopping malls on the planet, but it is also home to one of the largest aquariums on earth. The aquarium contains a 2.64 million gallon tank with more than 33,000 specimens. The sharks and rays alone account for 400 of these. It now contains the world’s largest acrylic glass panel, bigger even than the one in Okinawa (which set records when it was first constructed). And the number one largest aquarium on the planet? The honor goes to the Georgia Aquarium in Atlanta. This aquarium opened up in 2005, thanks to a $250 million grant from Bernie Marcus, the co-founder of the Home Depot hardware store chain. The Georgia Aquarium is well known for a couple of things. One is the absolutely massive 6.3 million gallon tank containing the Ocean Voyager exhibit. The other is the aquarium’s whale shark population. The Georgia Aquarium is the only aquarium outside of Asia to serve as a home for whale sharks. That’s not necessarily a boon, however, since two of the sharks have died, and there are some concerns that the aquarium isn’t an appropriate home for them.

If you have ever had the chance to visit one of these massive aquariums or any others which are of a similar caliber, you know what an amazing experience it can be. If you haven’t, though, and you have only visited a small local aquarium with a handful of specimens, you have really only gotten a taste of the fun and wonder that aquariums have to offer.

These world-class aquariums not only feature magnificent displays, but also can teach you a great deal about the planet’s underwater ecology. Many are run by marine scientists who are involved with important conservation efforts, and the fee you pay to visit will go toward helping these underwater species to survive in a changing world. Next time you are in one of these cities, be sure to set aside a day to enjoy one of the world’s largest and best aquariums. It will be an experience you will remember forever! 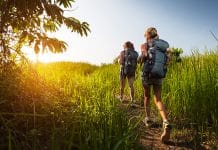