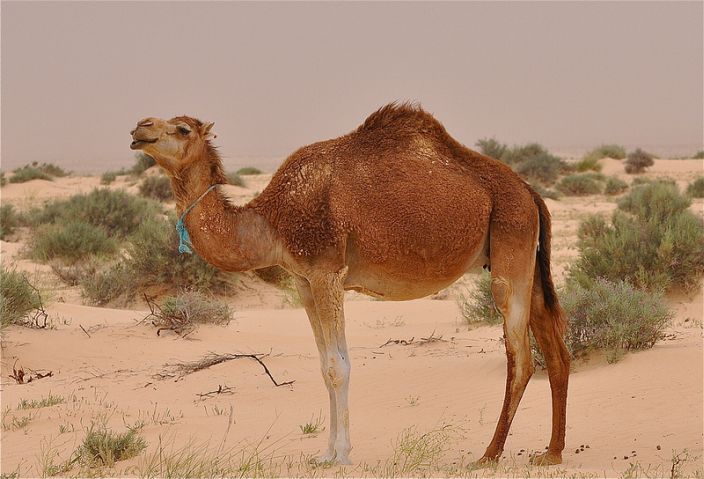 When you think of a desert, do you imagine a lifeless wasteland where nothing can survive? While many people think of deserts as lifeless locations, they are actually quite diverse and rich in life.

In fact, it could be said that there is no finer example of the richness of evolution than a desert ecology. Why? The harsh conditions imposed by the desert climate force desert inhabitants to adapt. The fact that many species of plants and animals thrive even in these conditions is a great testament to the resourcefulness of life. Here are some amazingly adaptive Sahara desert animals. These adorable little rodents have very long legs and can jump very high. Despite their minuteness, they can run up to 16 miles per hour, making them quite challenging to catch. Amazingly, the jerboa doesn’t have to drink water—quite a useful adaptation for a desert creature. It still needs to take in water of course, like all living things, but it is able to extract enough from its foods to sufficed for its needs. These foxes are nocturnal and are characterized by their very large ears. Not only do the ears help them to hear better in the desert, but they also help them to release body heat, keeping them cool. They are small and lightweight, usually weighing only a couple of pounds. This large lizard (generally; some can be quite small) is venomous and can become quite aggressive when threatened, especially during colder seasons. Monitor lizards not only include desert-thriving species in the Sahara, but also species which can live in forests or even wetlands. This makes them some of the most versatile creatures on the planet. They are extremely intelligent and can even count. Not a lot of people think of ostriches when asked to name a desert animal, but ostriches are some of the fastest animals in the Sahara. They are able to run up to 40 miles an hour, almost as fast as the gazelles. They can travel a long ways, and can also pick up noises and see movement across vast distances, helping them spot and avoid predators. When threatened, the ostrich can fight back, kicking with its long legs. There are a number of species of sidewinder in various deserts around the world. The horned viper is particularly well known in the Sahara. The venom from this snake can be lethal, and also quite painful, even in cases that do not lead to death. The unique sideways movement of the sidewinder helps it to traverse the sands quickly and effectively. Sadly, changes in the environment have caused the horned viper to enter the endangered species list. This type of scorpion is translucent and yellow in appearance, and is among the most venomous animals of the Sahara desert, and the entire world. They look ephemeral and fragile, but they are incredibly dangerous, capable of causing respiratory failure and death. Like the gazelle, the Addax antelope is well known for its sleekness and its beauty. They are among the most endangered animals on the planet, with long, elegant horns and flat feet. Sadly they have been hunted to the point where there are only around 500 left. Global warming has also done them no favors. They are however very good at crossing the Sahara sands on their flat feet. They will probably not be able to adapt to human threats and global warming fast enough to survive however, and need our help. Also known by the less dignifying (but perhaps more descriptive) name “dung beetle,” the scarab beetle was a holy symbol to the ancient Egyptians and has some impressive adaptability. Dung beetles make creative use of animal feces. They are able to subsist almost entirely on animal waste. There are several ways that scarabs can make use of the dung they find, depending on how flexible they feel about their living situations.

Dung beetles can roll dung until it makes a ball shape and then push it home, or simply dig a new burrow next to a heap of dung to live in. Some dung beetles just burrow into the dung they find and make it into a home, chewing their way out when they get hungry. Nom nom! Also known as the Ariel Gazelle, this animal is sleek and graceful, usually weighing around 25 kilograms. Many animals in the Sahara desert prey on gazelles, so the Dorcas gazelle has evolved to avoid them on impulse. When a predator approaches, the gazelle’s highly attuned body will automatically jump. This is known as “stotting.” It serves several purposes.

Firstly, it gets the gazelle out of immediate danger. Secondly, it demonstrates the gazelle’s speed and reflexes to the predator, discouraging it. Thirdly, it alerts other gazelles that a predator is approaching. If the gazelle is forced to run, it can achieve an astounding 49 miles per hour. One animal you probably think about when you think about the desert is the Sahara desert camel. Camels store a large amount of fat in the humps on top of their backs (no, not water—that is a myth). The fat can be burned for energy when the camel is unable to locate any food. While most of us are searching for ways to burn off fat and slim up our bodies, camels are actually evolved by nature to carry extra fat around to survive!

The Sahara desert really is quite diverse, and as you can see, some of the most incredible species on the planet make their home there. The conditions may be daunting, but the animals that live there are up for the challenge. Even in difficult conditions, life can prevail, which is really quite inspiring. Next time you’re going through a rough patch, think about the animals of the Sahara and how you can learn from their example.