Arctic tundra animals do not enjoy the luxury of simply heading into thick forests to escape the biting wind. Instead, it is just them vs. vast expanses of treeless tundra. Some, like the Caribou, do head south to enjoy those forests at least part if the year. Animals in the tundra survive thanks to harboring multiple defenses against the paralyzing cold. Here are some examples of how arctic animals are often perfectly adapted to life in the cold: 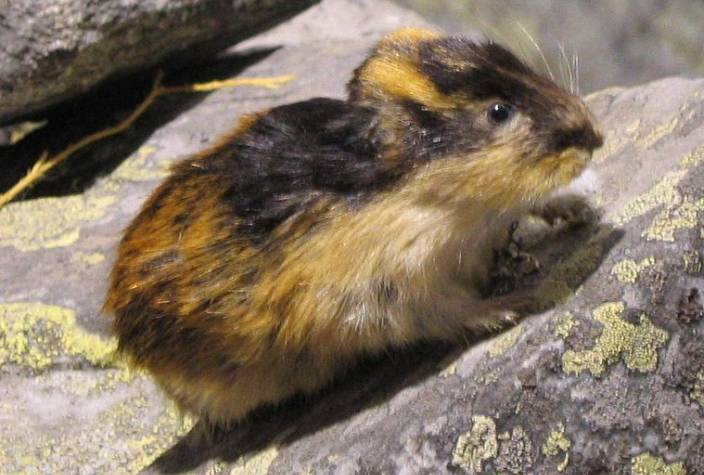 Both the Collared Lemming and the Brown Lemming call the arctic tundra home. The former is more of a rocky dweller, while the latter prefers wetter areas. Lemmings survive the cold primarily for two reasons. First, they are furry, very furry. In fact, from a distance, they can appear almost round in shape.

Kind of gives new meaning to the term "fur ball." They look like you could pick them up and play catch with them. First, though, you'd have to catch one, and they are pretty elusive.

In the winter, they burrow down into the snow. The snow traps the air, and it becomes an excellent insulator. Sadly for the lemming, many arctic predators find these little guys to be tasty treats, all that long fur notwithstanding. As a result, time spent in snow tunnels also keeps them safe. 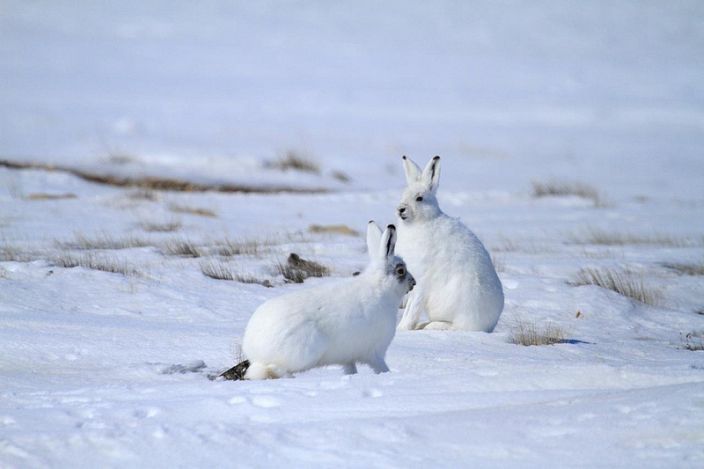 Few would compare the Arctic Hare to the Musk Ox in any way. However, they do share a common approach to surviving the arctic cold - they hang out in groups. In fact, the hares do so in a big way. There may be literally hundreds of them huddling together for both warmth and protection. When a noise is heard they act a little like crooks after a robbery; they scatter in all directions. 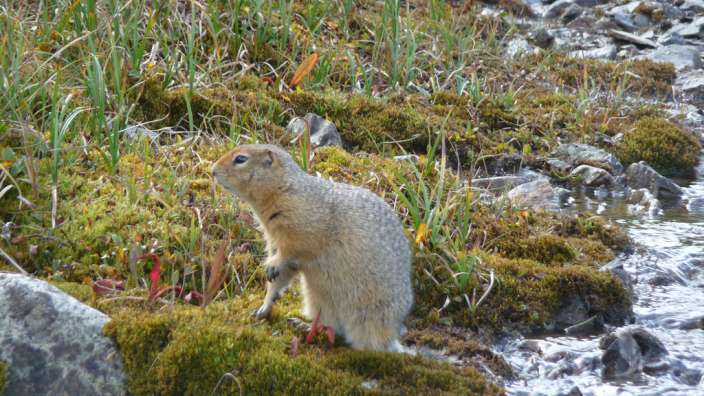 These particular ground squirrels probably hang out in their dens laughing as they think about all those hares huddling out in the cold. Before the arctic winter arrives, they wisely line their burrows with great insulators like Musk Ox hair, leaves, and lichens.

While they sleep, their body temperature drops to just a tad above freezing, and their heartbeat slows way down. This particular ground squirrel still does use insulators, including the ground itself. It also adapts to the cold by slipping into a virtually vegetative state. Rumpelstiltskin he's not, but the arctic ground squirrel does hibernate for a full seven months at a stretch. 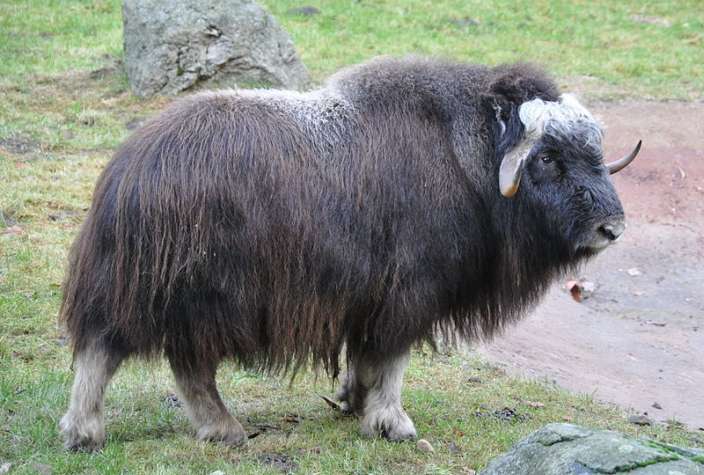 The Musk Ox is one of the most distinct animals in the tundra. Unlike the snowy owl, arctic hare, article fox, and many other arctic animals that blend into the white snow, this massive beast could care less. His fur may be dark, but it is also warm, for a number of reasons:

Air is a wonderful insulator, and the hollow hairs of the Musk Ox keep the air warmed by body heat close by where it is needed. And, when it comes to this citizen of the tundra, there is a whole lot of that hair. It hangs almost to the ground, creating a tent of sorts. The area directly beneath the animal is kept warm. That layer of warm air adds to comfort. Finally, as is true of many arctic animals, the fur is very thick. Relatively warmer air is not only trapped inside the hollow hairs, but all around them as well.

Plus, there's power in numbers. During spells of extreme cold, they huddle together. Collectively, all the body heat they emit helps to warm the surrounding air just a little. Some of us run around in the cold to stay warm; it appears that the sedentary Musk Ox is not too keen on that idea. That huddling is for protection as well. Wolves are always on the prowl for smaller calves. Therefore, the adults form a circle around their young, with their prominent horns pointing outward for protection.

Like the Polar Bear, the Musk Ox has one defense after another against the arctic cold, helping them to maintain their core temperature. 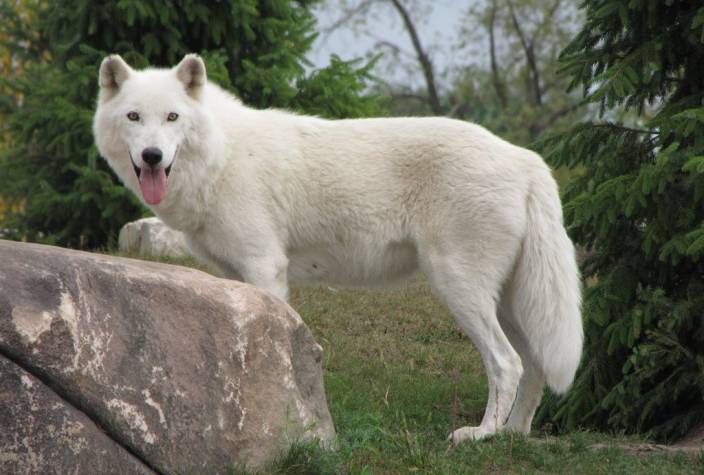 Compared to other species of wolves, these inhabitants of the far north have evolved some rather interesting ways to minimize heat loss. Their legs are shorter, their ears are smaller and more rounded, and they have a shorter muzzle. Apparently, all of these smaller adjustments to the bitter cold add up to survival.

These wolves also deploy a double-barreled defense between the biting winds and their skin. They have both a fur coat and a thick undercoat. The overcoat is thick and long. Underneath, the soft fur near the skin creates another later of trapped air warmed by body heat. 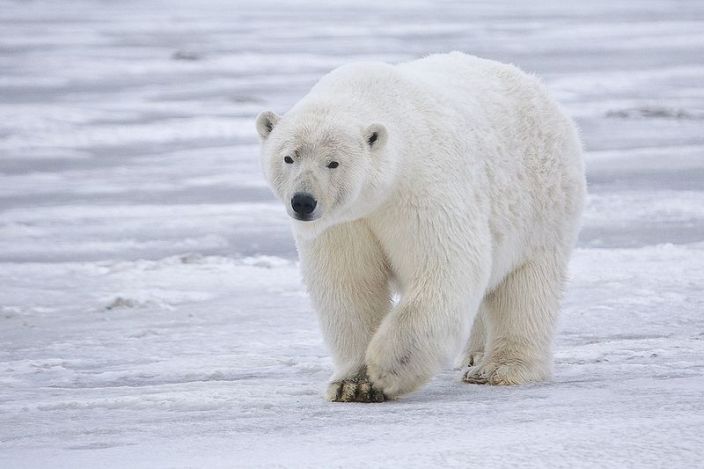 Dominant among all of the land-based arctic animals is the Polar Bear. They can handle just about anything the Arctic winters throw at them for a number of reasons:

Polar Bears look all soft and furry in pictures and at the zoo. In reality, the bear's fur coat is quite oily. This keeps the moisture at bay, even when they are frolicking in the water. Anyone who has been cold and wet realizes that it's far worse than just being cold.

Long, heavy fur essentially creates an insulating layer of moderated air between the bear and it's frosty surroundings. Body heat is not dissipated out into the cold. Rather, it is trapped in the fur where it adds a beneficial layer of insulating air.

Many of us are all-too-acquainted with the fact that fat insulates far better than muscle and other body tissue. The Polar Bear takes the insulating power of fat to a new level by battling the cold with a layer of blubber directly underneath the skin.

Ultimately, the famed Polar Bear has that layer of insulating fat working together with a layer of air trapped in its long fur. Finally, the oily coat keeps moisture away to keep this massive creature safe from the ravages of hypothermia.

Although the many ways that arctic tundra animals adapt to the cold seem very different, most of them survive because they effectively employ just a few basic principles:

You'd think that many tundra animals would beat the cold by hibernating through it. However, only the arctic ground squirrel seems to take this "easy" way out. The rest of these arctic animals endure it all, including gale-driven blizzards howling across the treeless tundra.