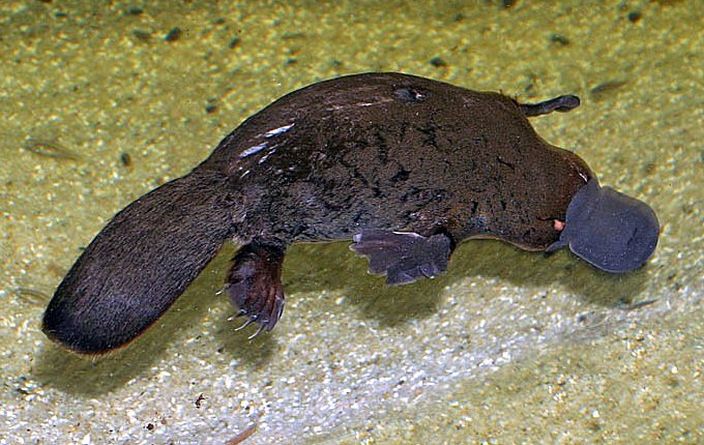 Resembling an amphibious mole, the platypus is often described as having the body of a beaver with a duck’s bill sewn on perfectly. As one of the most evolutionary distinct mammals alive, the platypus is instantly recognizable for its broad flattened bill, dense waterproof fur, webbed feet, and long thick tail.

While this species is most famous for being among the very few mammals to lay eggs, the following are some lesser-known fun facts about platypus.

Did You Know?
You can use "platypuses" or "platypus" as the plural for the animal. "Platypi" is technically incorrect but very fun to say. The correct greek plural would instead be "platypodes."

PLATYPUS HABITAT: WHERE DOES THE PLATYPUS LIVE?

Endemic to Australia, the platypus can be found in eastern Queensland, New South Wales, throughout Tasmania, and eastern, central, and southwestern Victoria. In recent years, there has also been a newly introduced population of platypuses on Kangaroo Island within South Australia. Across the continent of their natural habitat, the platypus mostly lives in freshwater lakes, rivers, lagoons, farm dams, and streams.

Most platypuses are found in bodies of water that have earth banks with roots, overhanging vegetation, reeds, and logs to be more suitable for constructing their burrows. Inhabiting temperate, tropical, terrestrial, and freshwater, the platypus usually lives in streams that are no more than five meters deep, but sometimes they can be discovered in rivers up to 1,000 meters deep. Female platypuses typically make two separate burrows, one for themselves and a male as well as one for having new babies.

PLATYPUS DIET: WHAT DOES THE PLATYPUS EAT? Emerging from their burrows at dusk, the platypus spends most of the evening and night hours foraging their shallow water for bottom-dwelling invertebrates. Their diet mostly consists of crustaceans, earthworms, shrimp, mollusks, annelid worms, crayfish, dragonflies, mussels, trout eggs, tadpoles, and the larvae of insects. In fact, platypuses can consume their entire body weight in food within just a 24-hour period.

For about 20 to 40 seconds at a time, the platypuses search for food by diving to the bottom of the stream with their webbed feet and probing the muddy bottom with the sensitive bill. Since they must close their eyes underwater, the animals see in the murky water by sensing electrical currents that are created by their prey’s small muscle movements. Then, the prey are stored in special pouches behind the bill and consumed after returning to the surface. As a uniquely featured monotreme creature, the platypus is most distinctive for having a long soft, leathery snout that resembles a duck’s bill. Covered in dense fur over the majority of its long slender body, the thick hair is naturally waterproof to keep the platypus warm and dry within the water. As a multiple layered coat, the final layer has long flat hairs that are useful in detecting the presence of nearby objects in muddy water. While the plush pelage that covers its streamlined body is dark brown on the back, it turns silvery gray to yellow on the underbelly.

Roughly the same size as a domesticated cat, platypuses are typically between 12 to 24 inches long and have a weight that ranges from two to four pounds at most. Although many mistakenly believe that their wide beaver-like tails are used to propel them through the water, they are really used as a storage space for fat. Allowing the animal to swim and dive without much effort, the platypus has webbed paws and short legs protruding from the sides like an otter.

Generally regarded as both nocturnal and crepuscular, the platypus is most active during the dusk and nighttime hours, but may also be seen during the day when the sky is overcast. As an excellent swimmer, platypuses spend the majority of their waking hours propelling through the water with a rowing motion of their front feet. Known for being a shy and solitary animal that only gathers during the mating season, platypuses will spend around 12 hours daily swimming and searching for food in solitude.

As an endothermic species, platypuses are able to maintain a body temperature lower than most mammals at around 90 degrees Fahrenheit. During the daylight hours when not in the water, the platypus hides out in an individual oval-shaped burrow that is dug three to eight meters into a bank. Perhaps due to its high-caloric diet, the average time spent sleeping for the platypus can be around 14 hours each day.

Within the polygynous mating system in which males and females have multiple mating partners in their lifetime, the females are believed to become sexually mature at two years old and remain breeding until over nine years of age. While the male takes no responsibility in caring for their young after mating, the females will immediately build a deep burrow up to 66 feet long that is blocked with plugs to protect their new young from predators and rising waters. After her eggs have hatched, the mother feeds the young with milk released through pores in her skin for around three to four months. At this time, the young emerge from the burrow and begin an independent life. With mating taking place in the water, the solitary platypuses only come together once each year in the breeding season from June to October to reproduce.

Around 21 days after mating has occurred, the females lay their eggs. After a short incubation period of just 10 to 14 days, the tiny naked young hatch.

According to the International Union for Conservation of Nature, it is unknown what the actual population of platypuses may be, but the closest estimates are in the low thousands. As a fairly common species, populations still occur in about 80 percent of the river basins in Victoria.

THREATS TO THE PLATYPUS Since the platypus is highly dependent on a freshwater environment, the animal faces the largest threats from habitat destruction, waterway pollution, and land clearing. Scientists also fear that their lifespan may be shortly diminished due to the fact that the platypuses are increasingly being hunted by predators like snakes, goannas, foxes, rodents, and birds of prey. However, the platypus continues to be classified as least concern and populations are stable for a very low risk of extinction.