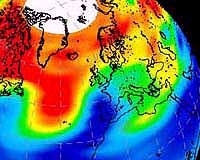 The 1985 report of the discovery of an “ozone hole” over Antarctica focused attention on the idea that humans can have a significant impact on the global environment. This discovery, along with evidence that ozone is being lost at nearly all latitudes outside the tropics, has prompted much research into the causes of ozone depletion and the biological effects of increased ultraviolet radiation exposure. The potential effects on humans and the environment have led to international resolutions designed to gradually phase out production of ozone-depleting substances. As a result, the scientific and industrial communities have collaborated to find safe and economical replacements for chlorofluorocarbons (CFCs), the manmade chemicals implicated in ozone loss. Below is an informative article on ozone depletion:

Ozone Layer Most Fragile On Record

Fears Over Increase In Skin Cancer as Scientists Report that Climate Change Continues to Destroy the Earth’s Protection
by Paul Brown
The protective ozone layer over the Arctic has thinned this winter to the lowest levels since records began, alarming scientists who believed it had begun to heal.
The increased loss of ozone allows more harmful ultraviolet light to reach the earth’s surface, making children and outdoor enthusiasts such as skiers more vulnerable to skin cancer – a disease which is already dramatically increasing.

Scientists yesterday reinforced the warning that people going out in the sun this summer should protect themselves with creams and hats.
Research by Cambridge University shows that it is not increased pollution but a side effect of climate change that is making ozone depletion worse. At high altitudes, 50% of the protective layer had been destroyed.

The research has dashed hopes that the ozone layer was on the mend. Since the winter of 1999-2000, when depletion was almost as bad, scientists had believed an improvement was under way as pollution was reduced. But they now believe it could be another 50 years before the problem is solved.

What appears to have caused the further loss of ozone is the increasing number of stratospheric clouds in the winter, 15 miles above the earth. These clouds, in the middle of the ozone layer, provide a platform which makes it easier for rapid chemical reactions which destroy ozone to take place. This year, for three months from the end of November, there were more clouds for longer periods than ever previously recorded.

Cambridge University scientists said yesterday that, in late March, when ozone depletion was at its worst, Arctic air masses drifted over the UK and the rest of Europe as far south as northern Italy, giving significantly higher doses of ultraviolet radiation and sunburn risk.

The results, which were announced at a Geophysical Union meeting in Vienna yesterday, are part of a European venture coordinated by Cambridge University’s chemistry department, which has been studying the relationship between the ozone layer and climate change since May 2004.

Yesterday, Professor John Pyle, from the university, said: “These were the lowest levels of ozone recorded since measurements began 40 years ago. We thought things would start to get better because of the phasing out of CFCs and other chemicals because of the Montreal protocol, but this has not happened.

“The pollution levels have leveled off but changes in the atmosphere have made it easier for the chemical reactions to take place that allow pollutants to destroy ozone. With these changes likely to continue and get worse as global warming increases, then ozone will be further depleted even if the level of pollution is going down.”

The relationship between the depletion of the ozone layer and climate change is so complex that the EU is investing £11m in a five-year project to try to understand and predict what is happening. Reporting the results of the first year, the scientists told the meeting in Vienna yesterday that “the atmospheric lifetime of these [ozone depleting] compounds is extremely long and the concentrations will remain at dangerously high levels for another half century.”

Increased greenhouse gases in the air trap more heat in the lower atmosphere, but the stratosphere far above the earth is getting colder. As a result, ice clouds form between 14 and 26 kilometers above the earth, exactly in the region where the protective ozone is found.

The European scientists reported the first signs of ozone loss in January. As sunlight returned to northern latitudes, the rate of ozone depletion increased and rapid destruction of ozone occurred throughout February and March. In the altitude range where the ozone layer usually reaches its maximum concentration, more than half of the ozone was lost. In the lower atmosphere losses were not so great.

“Overall, about 30% of the ozone layer was destroyed,” said Dr Markus Rex, from the Alfred Wegener Institute in Potsdam, Germany, another member of the team. He said the cold conditions which created polar stratospheric clouds were four times more extensive in 2005 than in the 1960s and 70s.

“It just means we have less natural protection than we should have and we are used to. It means that we should be careful about exposing ourselves to the sun, but that is already the case, this just makes things slightly worse,” he said.

Health effects of UV-B light
Genetic damage DNA absorbs UV-B light and the absorbed energy can break bonds in the DNA. Most of the DNA breakages are repaired by proteins present in the cells nucleus but unrepaired genetic damage of the DNA can lead to skin cancers. In fact one method that scientists use to analyze amounts of ‘genetically-damaging UV-B is to expose samples of DNA to the light and then count the number of breaks in the DNA. For example J.Regan’s work at the Florida Institute of Technology used human DNA to find that genetically significant doses of solar radiation could penetrate as far as 9 feet into non-turbulent ocean water.

The Cancer link The principle danger of skin cancer is to light-skinned peoples. A 1%decrease in the ozone layer will cause a estimated 2%increase in UV-B irradiation; it is estimated that this will lead to a 4%increase in basal carcinomas and 6%increase in squamous-cell carcinomas.[Graedel&Crutzen]. 90% of the skin carcinomas are attributed to UV-B exposure [Wayne] and the chemical mechanism by which it causes skin cancer has been identified [Tevini]. The above named carcinomas are relatively easy to treat, if detected in time, and are rarely fatal. But the much more dangerous malignant melanoma is not as well understood. There appears to be a correlation between brief, high intensity exposures to UV and eventual appearance (as long as 10-20yrs!) of melanoma. Twice as many deaths due to melanomas are seen in the southern states of Texas and Florida, as in the northern states of Wisconsin and Montana, but there could be many other factors involved. One undisputed effect of long-term sun exposure is the premature aging of the skin due to both UV-A, UV-B and UV-C. Even careful tanning kills skin cells, damages DNA and causes permanent changes in skin connective tissue which leads to wrinkle formation in later life. There is no such thing as a safe tan.

Possible eye damage can result from high doses of UV light, particularly to the cornea which is a good absorber of UV light. High doses of UV light can causes a temporary clouding of the cornea, called ‘snow-blindness’, and chronic doses has been tentatively linked to the formation of cataracts. Higher incidences of cataracts are found at high elevations,Tibet and Bolivia; and higher incidences are seen at lower latitudes(approaching the equator).

Damage to marine life The penetration of increased amounts of UV-B light has caused great concern over the health of marine plankton that densely populate the top 2 meters of ocean water. The natural protective-response of most chlorophyll containing cells to increased light-radiation is to produce more light-absorbing pigments but this protective response is not triggered by UV-B light. Another possible response of plankton is to sink deeper into the water but this reduces the amount of visible light they need for photosynthesis, and thereby reduces their growth and reproduction rate. In other words, the amount of food and oxygen produced by plankton could be reduced by UV exposure without killing individual organisms. There are several other considerations:
Ultraviolet levels are over 1,000 times higher at the equator than at the polar regions so it is presumed that marine life at the equator is much better adapted to the higher environmental UV light than organisms in the polar regions. The current concern of marine biologists is mostly over the more sensitive Antarctic phytoplankton which normally would receive very low doses of UV. Only one large-scale field survey of Antarctic phytoplankton has been carried out so far [Smith et.al _Science_1992] ; they found a 6-12% drop in phytoplankton productivity once their ship entered the area of the spring-time ozone hole. Since the hole only lasts from 10-12 weeks this translates into a 2-4%loss overall, a measurable but not yet catastrophic loss.
Both plants and phytoplankton vary widely in their sensitivity to UV-B. When over 200 agricultural plants were tested, more than half showed sensitivity to UV-B light. Other plants showed negligible effects or even a small increase in vigor. Even within a species there were marked differences; for example one variety of soybean showed a 16% decrease in growth while another variety of the same soybean showed no effect [R.Parson]. An increase in UV-B could cause a shift in population rather than a large die-off of plants
An increase in UV-B will cause increased amounts of Ozone to be produced at lower levels in the atmosphere. While some have hailed the protection offered by this ‘pollution-shield’ many plants have shown themselves to be very sensitive to photochemical smog.