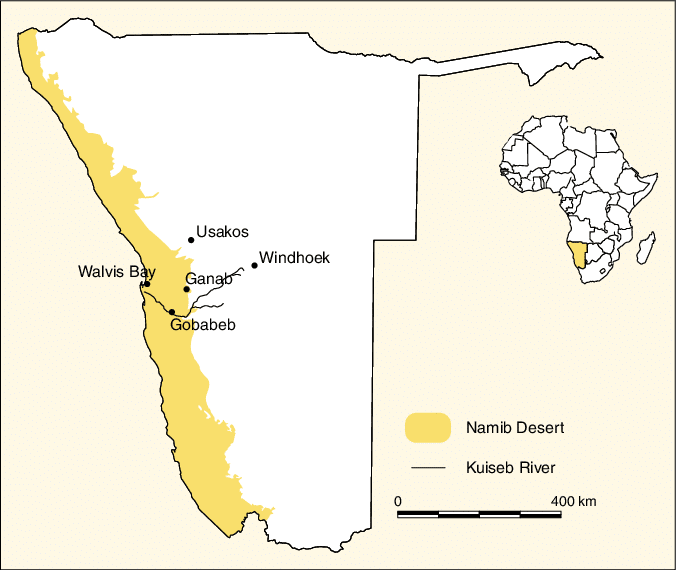 Along the southwest coast of Africa, you’ll find the expansive desert known as the Namib. Aptly named, Namib translates to “vast place” in English. The desert exists along the coasts of Angola, Namibia, and South Africa and covers over 1,200 miles of the African landscape.

Thanks to its interesting geological conditions, the Namib is one of the most interesting deserts in the world. Let’s take a deeper dive and learn more about this fascinating and expansive desert.

Fortunately, the Namib Desert is well protected, thanks to extensive conservation efforts. There are many protected areas within the desert, including the Namib-Naukluft National Park. This park is the most massive conservation area in all of southern Africa, and it’s located smack in the middle of the desert.

North of the national park, you’ll find the National West Coast Tourist Recreation area. While this area doesn’t have the same ecological protections as the park, it is home to one of the largest colonies of Cape fur seals in the world. Thanks to diligent seal conservation efforts in this area, over 80,000 seals live in this area.

Parts of the desert are also home to a small but growing population of endangered Desert Lions. As conservation efforts began, the lion population in the area was severely endangered, with only about 20 lions total in the area. However, that population has ballooned to around 150 today, thanks to the 51,380 square kilometer conservation area that has been created, partially in the Namib Desert.

Threats to the Area

While the area is well protected, there are still many threats that exist, most of which are man-made.

The greatest threat to the area is the drop in the water table along the area of the Kuiseb River. This is due in large part to the demands for water in the area. Not only does this area supply water to the homes located near the desert, but it’s also used to meet the extremely high demands of the uranium mining industry situated near Walvis Bay.

The Department of Water Affairs is constantly prospecting to find new water sources to supply the area. However, should new sources be found, this will open up an entire can of worms that could have an extremely negative impact to the desert. With new water comes new infrastructure, including the development of roadways, pipelines, and electrical systems. This new development would run through one of the largest, most pristine dune deserts in the world.

The area along the Kuiseb River acts as a natural windbreak, which prevents the dune sea from creeping northward and encroaching onto the gravel plains. Any changes in this area that would result from infrastructure development could have a profoundly adverse effect on the ecological conditions of the desert.

Another major threat to the area is created by the off-road vehicles which make their way through the desert. Since rainfall in the area is so sparse, it can take as long as 40 years for tracks to disappear. The majority of the damage is caused by the vehicles of the local mining company as they set out on prospecting expeditions.

These vehicles also cause significant damage to the lichen population in the area. Lichens are a composite organism that’s birthed from algae or cyanobacteria that’s located within the filaments of fungi. These organisms grow at an incredibly slow rate and are unable to repair themselves quickly. So, damage done by mining vehicles has a profound effect on their population.

Another threat to the area is succulent farming in the southern section of the desert. In an attempt to curtail the cultivation and distribution of these plants, some species are actually illegal to sell. However, illegal trade is fairly considerable, and despite the laws, succulents continue to be farmed in the area.

The desert spans over 1,200 miles and stretches from the Atlantic coasts of Angola, Namibia and South Africa into Western Cape, South Africa. A section of the Namib located further north is known as Moçâmedes Desert, while the southern section borders the Kalahari Desert.

The desert has a broad range of geological features throughout. Closest to the coast, desert sands stretch on for hundreds of miles. Further inland, you’ll find gravel plains and mountain outcrops as well. Massive sand dunes are also characteristic of the desert’s landscape, with some of them reaching close to 1,000 feet in height. These dunes are nearly the largest in the world, second only to China’s Badain Jaran Desert.

Several rivers also run through the area. The most famous Namib Desert river is the Kuiseb, but there are many other rivers in the area including the Swakob, Cunene, Orange, Olifants and Tsauchab rivers.

Along the coast, especially to the north, warm coastal air collides with the dry, desert air of the Namib and produces intense fog. Parts of the area are enveloped by this fog for as many as 180 days each year. This dense fog makes it difficult for ships to navigate, and there are many shipwrecks in this area, which makes sense given its nickname, “The Skeleton Coast.” This fog is also the lifeforce for several different species of plants and animals in the area.

Along the coast, the weather is temperate and predictable, with temperatures usually ranging from 48–68°F. Meanwhile, further inland, temperatures can vary greatly. The area can often reach temperatures of greater than 110°F during the daytime. Meanwhile, at night the region is often freezing cold.

The physical geography of the area is varied, especially as you reach the less arid sections of the desert.

The soils in the Namib River vary as greatly as the geography does. Some areas, along washes and ephemeral rivers, feature rich soils which are capable of sustaining a multitude of plant species.

Meanwhile, in more arid areas, like the dune fields, the soil is almost completely devoid of nutrients. Despite this lack of nutrients, these areas do support perennial plant species, as certain types of herbaceous plants have evolved to thrive in this environment.

One nutrient that’s present at high levels among the dunes is iron. The rich levels of iron in this soil have stained the sands a beautiful, deep clay/ochre color. This coloration is particularly noticeable within the Sossusvlei, the Namib’s most famous area, and a notable tourist attraction.

This massive park covers 49,768 square kilometers of the Namib Desert region. The park represents a fairly complete picture of the desert, as it runs through areas of gravel plains, the semi-desert, the Kuiseb River and the dune sea.

The park extends from Swakopmund in the North to Luderitz in the south. While the northern area of the park is open to the public, the southern section of the park, known as Diamond Area #2 is strictly controlled, and public entry is not permitted.

Despite the severe aridity of the landscape, many species thrive in the desert.

Perhaps the most prolific of all animals in the desert are reptiles. Many different species have evolved to thrive in the harsh environment where other species, like large mammals and birds, have not. In the desert, there are more than 25 endemic reptiles and 70 different species in total.

Perhaps the most well-known animals in the region are actually beetles. Many of these beetle species have evolved to be able to use the weather conditions of the Namib to its advantage. One such Namib Desert beetle is the head-standing beetle. This species will walk out to the top of a dune when conditions are foggy and oddly contorts itself so that its head is down and its body is forward, occupying maximum surface area. As fog precipitates onto the beetle, it runs down its body and into its mouth, allowing it to drink.

For years, people have hypothesized as to the cause of strange circle on the ground that seems to result in serious changes in the vegetation pattern. These circles can be found in several different locations throughout the desert, and their origin is completely unknown. Recently, scientists have discovered that the several different termite species which call the desert their home are the likely culprits behind these “fairy rings.”

Various small rodent species also thrive in the desert. These animals make their homes in the rockier terrain of the western deserts, in the sand dunes and among the plants of the gravel plains. Several of these rodent species are extremely well suited to the environment, thanks to their ability to “swim” through the loosely packed sand of the desert. The desert is also home to two species of bat that is almost exclusively found in the Namib.

As for the animals that come to mind when you think of a desert environment, they’re very rare, if they exist in the region at all. Gemsbok and springbok are scattered throughout the desert in fairly large numbers, while Hartmann’s zebras are found in the easternmost points of the desert.

Several other large species, such as lions, elephants, black and white rhinos, giraffes and hippos have become locally extinct, thanks to local settlers who killed off these species as they set up camp along the Orange River. The area surrounding the Orange River was once famous for its prolific colony of rhinos.

The area certainly isn’t without predators, however. Cheetahs, brown hyenas, spotted hyenas, Cape foxes and bat-eared foxes are all common in the area, as are baboons. These animals tend to make their homes in and around the rivers which run through the desert, especially the Kuiseb and Swakop rivers.

The Sandvis area along the coast, formerly known as Sandwich Harbor is home to 113 species of bird and counting. However, avian species further inland are very rare. There are still some species that are endemic to the area including the dune lark, Benguela long-billed lark, Gray’s lark, bank cormorant, tractrac chat and Rüppell’s korhaan.

While it may seem like the area on earth least likely to support plant growth, the Namib actually has several species of plant which thrive in the area in spite of the harsh conditions.

Perhaps the most important species of all is Namibia’s national plant, the welwitschias. This beautiful and incredibly odd plant has perplexed scientists for years due to its hardiness, extremely long lifespan and strange growth patterns.

A single welwitschia can survive for hundreds of years in the unforgiving desert, which has given them the nickname “the living fossil.” Despite living for hundreds of years, a welwitschia plant produces only two leaves in its entire lifetime. These leaves continue to grow outwards and become very long over time, with the ends of the leaves severely tattered by the sand and wind.

In addition to these incredible plants, several other species thrive in the area including ice plants, Nara melon trees, and camel thorn trees. While some plant species can utilize moisture that’s carried in by fog as it travels across the coast, this isn’t always the case.

The Nara melon trees and camel thorn trees, for example, have incredible root systems that are capable of reaching 40-60m below the surface to tap into underground water reserves. Usually, the presence of these trees is a sure indicator that there’s water located below.