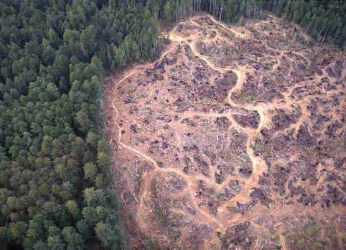 The primary threat to the world’s biodiversity is habitat destruction, sometimes referred to habitat loss. Habitat loss alters or eliminates the conditions needed for plants and animals to survive. Deforestation is of particular concern. Canada’s old growth forests, for example, are now under threat from logging activities. Tropical forests are among the most biologically rich areas on Earth. The UN Food and Agriculture Organization (FAO) recently estimated the annual rate of loss of these ecosystems was nearly 2% by the end of the 1990s. This means that an area the size of Florida is clearcut each year in forested tropical regions alone. Unfortunately, similar levels of habitat destruction are occurring in ecosystems around the world.

Aside from large-scale commercial deforestation, other factors lead to loss of habitat: forests converted to agriculture and livestock production; coastal development; and estuaries, bogs and swamps converted to landfills, dumps and residential areas. These biologically diverse forests support a wide variety of animal, bird and plant life that can’t be found elsewhere.

Another contributing factor is urbanization, which means that natural ecosystems and agricultural lands are lost as they are converted into shopping centers, housing developments and office space. Urban development brings related problems, such as vehicle and factory pollution in the form of greenhouse gases and other emissions, and the generation of toxic waste, garbage and sewage.
Habitat loss is an important factor coral reefs. Corals are small animals which belong to the group cnidaria. Other cnidarians include hydras, jellyfish, and sea anemones. Corals are sessile animals, meaning they are not mobile but stay fixed in one place. They feed by reaching out with tentacles to catch prey such as small fish and planktonic animals. Corals live in colonies consisting of many individuals, each of which is called polyp. They secrete a hard calcium carbonate skeleton, which serves as a uniform base for the colony. The skeleton also provides protection, as the polyps can contract into the structure if predators approach. It is these hard skeletal structures that build up coral reefs over time. Different species of coral build structures of various sizes and shapes (“brain corals,” “fan corals,” etc.), creating amazing diversity and complexity in the coral reef ecosystem.

Most reef-dwelling corals have a symbiotic (mutually beneficial) relationship with algae called zooxanthellae. The plant-like algae live inside the coral polyps and perform photosynthesis, producing food which is shared with the coral. In exchange the coral provides the algae with protection and access to light, which is necessary for photosynthesis. The zooxanthellae also lend their color to their coral symbionts. Coral bleaching occurs when corals lose their zooxanthellae, exposing the white calcium carbonate skeletons of the coral colony. Habitat loss or change in habitat for corals can result from excess shade, increased levels of ultraviolet radiation, sedimentation, pollution, salinity changes, and increased temperatures. Many of these are a result of human activities. Conservation Science Institute Science Director, Tom Okey, and fellow, Carlos G. A. Ormond, are studying coral.

Ardrizzone, G.D., P. Tucci, A. Somaschini, and A. Bellauscio. 2000. Is bottom trawling partly responsible for the regression of Posidonia oceanica meadows in the Mediterranean Sea? Pp. 37-46 in M.J. Kaiser and S.J. de Groot. The Effects of Fishing on Non-target Species and Habitats. Blackwell Science.

Ball, B., B. Munday, and I. Tuck. 2000. Effects of otter trawling on the benthos and environment in muddy sediments. Pp. 69-82 in M.J. Kaiser and S.J. de Groot. The Effects of Fishing on Non-target Species and Habitats. Blackwell Science.

Bergman, M.J.N., and M. Hup. 1992. Direct effects of beam trawling on macrofauna in a sandy sediment in the southern North Sea. ICES Journal of Marine Science 49:5-11.

Brown, B., W.H. Wilson, Jr. 1997. The role of commercial digging of mudflats as an agent for change of infaunal intertidal populations. Journal of Experimental Marine Biology and Ecology 218:49-61.

Gotceitas, V, S. Fraser and J. A. Brown. 1995. Habitat use by juvenile Atlantic cod (Gadus morhua) in the presence of an actively foraging and non-foraging predator. Mar Biol 123:421-430.

Langton, R.W., P.J. Auster, and D.C. Schneider. 1994. A spatial and temporal perspective on fish distributions: improving our definition of fisheries habitat in the Gulf of Maine; pp. 25-50 in Stevenson, D. and E. Braasch, eds. Gulf of Maine Habitat Workshop Proceedings. RARGOM Report no. 94-2.

Reise, K. and A. Schubert. 1987. Macrobenthic turnover in the subtidal Wadden Sea: the Norderaue revisited after 60 years. Helgolander Meeresunters 41:69-82.