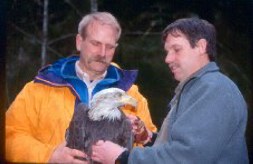 Bald eagles (Haliaeetus leucocephalus) are a member of the Accipitridae family, which also includes hawks, kites, and old-world vultures. Scientists loosely divide eagles into four groups based on their physical characteristics and behavior. The bald eagle is a sea or fish eagle.

The adults have a blackish-brown back and breast; a white head, neck, and tail; and yellow feet and bill. Juvenile bald eagles are a mixture of brown and white; with a black bill in young birds. The adult plumage develops when they’re sexually mature, at about 4 or 5 years of age. The bald eagle is the only eagle confined to North America, and there are no other large black birds in North America with white heads and tails. The female bald eagle is 35 to 37 inches, slightly larger than the male. With a wingspan which varies from 79 to 90 inches. The male bald eagle has a body length from 30 to 34 inches. The wingspan ranges from 72 to 85 inches. Bald eagles weigh from ten to fourteen pounds. Northern birds are significantly larger than their southern relatives. The golden eagle is larger than the bald eagle in average height and wingspan, but there isn’t much difference in their average weight. Wild bald eagles may live as long as thirty years, but the average lifespan is probably about fifteen to twenty years.

Eagles are at the top of the food chain, making them more vulnerable to toxic chemicals in the environment (see pollution). A bald eagle’s body temperature is 102 degrees Fahrenheit (38.8 degrees Celsius). Their skin is protected by feathers lined with down. The feet are cold resistance because they are mostly tendon. The outside of the bill is mostly nonliving material, with little blood supply. Once paired, bald eagles usually remain together until one dies. The survivor will take a new mate.

Shrill, high pitched, and twittering are common descriptions used for bald eagle vocalizations. Eagles do not have vocal cords. Sound is produced in the syrinx, a bony chamber located where the trachea divides to go to the lungs. Bald eagle calls may be a way of reinforcing the bond between the male and female, and to warn other eagles and predators that an area is defended.