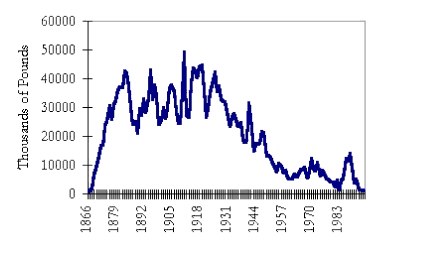 Bald eagles removed from the endangered species list, record salmon run in the Columbia River, crab population rebound in the Gulf of Alaska; these are a few of the headlines that give people the impression that some species have recovered or the oceans and land are once again recovered. But in all these cases and many more the current population increase is still far short of the historical averages for these species. And, the long-term trend is downward. The Columbia River salmon harvest figure to the left illustrates this point. This is referred to as “shifting baselines” which describes the tendency of people to perceive ocean life as abundant and ocean ecosystems as healthy even though they have slowly and steadily deteriorated. It’s easy to fall victim to the “shifting baselines syndrome” because gradual declines just don’t register the same way as oil spills or similar calamities. However, gradual declines have taken ecosystems to the same alarming endpoint that is more dramatically and obviously wrought by large destructive events.

How Fisheries Can Maintain Degraded States