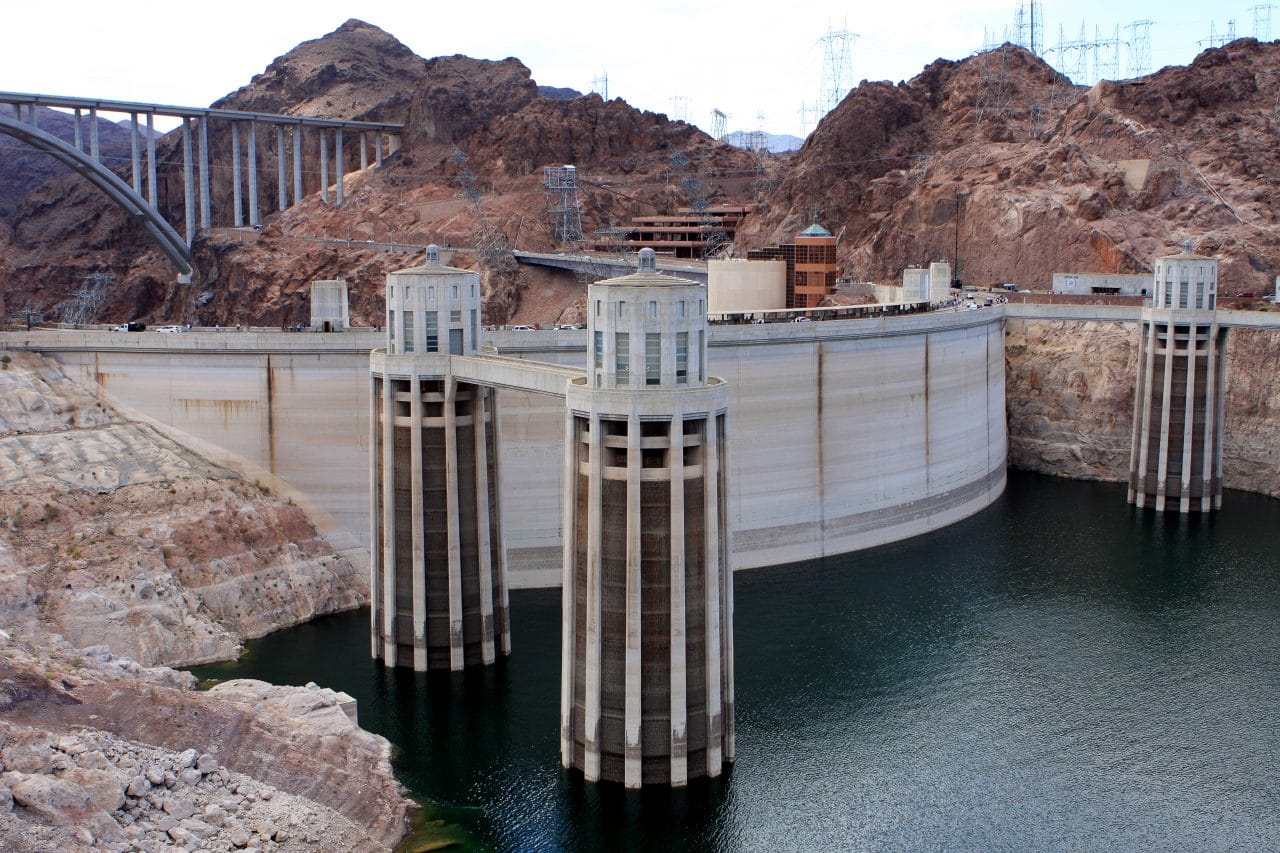 Hydroelectric power, or hydropower, refers to using moving water to generate electricity. Water flowing downhill turns turbines that drive electric generators. Reservoirs created by dams allow operators to precisely control the rate of water flow and the amount of power produced. A release pipe called a penstock concentrates the force of the elevated water in the reservoir. As long as the reservoir holds water, a stored bank of electric power is ready to be introduced into the power grid to run industrial machines and provide electric service to homes.

Humans have employed water power throughout the ages to aid them in their labor. As early as 200 AD, the Chinese used water-driven wheels in their iron smelts. Water power ground the grain for the ancient Greeks. When the Industrial Revolution began, flowing water provided power for textile mills and other early forms of machinery. In 1882, Appleton, Wisconsin, became the first city in the United States to use hydroelectric power. The idea caught on rapidly, and by 1892, 200 additional electric plants powered businesses and homes across the country. With the production of a more advanced hydropower system in Germany in 1891, hydroelectric plants started springing up around the globe as people began to understand the profit and luxury afforded by electrical power.

The Edward Dean Adams Power Plant, launched in 1895 at Niagara Falls, was the world’s largest hydropower plant at the turn of the 20th century. By 1936, the massive Hoover Dam project on the Arizona-Nevada border flipped the switch and began providing power to a significant portion of the Southwestern United States. This incredible construction project opened the door for modern hydropower facilities and established the trend of creating huge dams and reservoirs. The Three Gorges Dam power plant in China, currently the largest hydropower plant in the world, started coming online in 2012. Its enormous lake and multiple turbines can generate more than a billion watts of power. Engineers continue to add to its capacity with more turbines and generators.

Hydropower is the oldest, most reliable and largest source of renewable energy available to humanity. After a sizeable initial investment, water-powered electric plants operate for many years and require very little maintenance. This feature makes water power attractive for developing economies where skilled technicians may be in short supply. Lower production costs mean that power consumers pay less money for electricity. The access to cheap electric power can help spur economic development in remote areas just as it did in parts of the United States during the early 20th Century.

Burning carbon-based fuel is currently the most common way to produce electricity. As energy demands continue to soar, concerns abound over greenhouse gases adversely affecting the earth’s climate. Since hydroelectric power is not dependent on combustion to operate, experts consider it a significant and viable source of sustainable energy.

In addition to being clean, hydropower is renewable due to the earth’s hydrological cycle continually recharging rivers and reservoirs. Once the water used to drive a turbine does its job, it is immediately ready to be put to use for another purpose, such as irrigating crops or supplying drinking water to municipalities.

One positive attribute of hydropower that sets it apart from other renewable energy sources, like solar and wind, is its ability to store the potential energy of water for later use. Pumps use excess power generated in off-peak hours to move water into reservoirs. Operators can use this power to help balance the load on the power grid quickly during peak use times to increase overall efficiency and reliability. Although the benefits of hydropower make it an attractive source of electricity, it does come with challenges. Anytime humanity takes something from nature there are consequences, and the production of electrical power with hydroelectric plants is no exception.

One primary concern is the significant environmental footprint of massive river damming projects used to create the reservoirs that make hydropower possible. Blocking the natural flow of rivers creates impacts both upstream and downstream from the dam. On the upstream side, stopping the flow of water increases its temperature, causes plant matter to decay and can negatively affect the health of fish and plants. On the downstream side, interrupting natural flood cycles that distribute sedimentary soils throughout the river system via tributaries can also harm the environment.

Dams also create a problem for migrating fish species such as salmon. Blocked from swimming upstream to specific spawning locations, these fish are unable to reproduce. The stagnate water conditions created by damming rivers threaten other species’ ability to find enough food to survive.

Dams can also cause problems for humans. River damming projects have flooded homelands and displaced millions of people. These mass breakups of entire communities create myriad negative results for the people involved. Sociologists have also identified a “boomtown effect” in areas where hydropower comes to remote areas. The rapid influx of workers into once tight-knit and sheltered communities can cause a litany of social problems for an unsuspecting population.

Strategically Planning for the Future of Hydropower

The use of hydropower will likely continue to increase as governments give renewable and clean sources of power priority. By using hydropower to supplement wind and solar, utility companies can increase the total amount of reliable power obtained from renewable sources and lower its cost to consumers.  Its expansion, however, while ostensibly beneficial to the earth’s climate, will continue to put pressure on river environments.

In the U.S., there are over 2,000 operating hydropower plants. The total hydroelectric production capability is over 100 GW. The federal government has revealed plans for an additional 12.8 GW of electricity to be generated by hydropower by the year 2050. To accomplish this feat, they plan to invest large sums in upgrading the efficiency and capacities of existing plants as well as building plants on new sites. Also, they plan to add pumping stations to more fully exploit the load balancing properties of hydropower when used with other renewable forms of energy.

The expansion of hydropower will likely tend to drive overall energy costs down for many utility customers. The strategic use of more hydro pumping stations should also improve the overall reliability of the electrical power grid. Water recreational areas will become more plentiful as rivers are dammed to create reservoirs. These lakes can benefit local economies by attracting tourists and outdoor sports enthusiasts.

Approached responsibly, the addition of more hydropower plants across the globe does not have to be harmful to river valleys and wetlands. By using sound design principles and the latest technology, planners can reduce or eliminate many of the environmental problems caused by damming rivers.  Currently, scientists are developing ways to help fish get past dams with special ladders and other methods. Retrofitting existing dams with hydropower plants and carefully planning to minimize environmental damage of new dam construction are both strategies that can help with the advancement of hydropower. Any improvements in adverse impacts caused by damming rivers help the public to accept hydropower as a safe and clean source of energy. Since hydroelectric plants have been in existence for over a century, many government agencies charged with protecting resources and increasing use of renewable energy sources regulate their activity. The Department of Energy’s Office of Energy Efficiency and Renewable Energy (EERE) is a U.S. Government agency that attempts to educate the public about the use of hydropower. The U.S. Department of the Interior Bureau of Reclamation Power Resources Office is another agency that promotes the responsible development of hydropower resources and the use of damming for agriculture and recreation.

Organizations that promote hydropower through education and activism include the National Hydropower Association and the Hydro Research Foundation. On an international scale, the World Water Council (WWC) works to put water-related issues to the forefront of government agendas. This organization educates the public in an attempt to prompt citizens to demand that their governments take action on all the critical problems concerning water.

The Hydropower Reform Coalition is one of a growing number of organizations working for responsible use of water-driven power production. This group’s strategy is to train activists to participate in local decision-making hearings and meetings on river development and water use. They stress that since the licensing for many hydropower plants is coming up for renewal for the first time since modern environmental protection laws have gone into effect, the opportunity exists to force utility companies and governments to act to protect fragile aquatic ecosystems. This group actively recruits members to help ensure that the nation moves forward with hydropower in a way that promotes good environmental stewardship.

Opportunities abound for those interested in getting involved in the hydropower issue. Education on the benefits and challenges this energy source presents is the first step. A combination of investing in better technology and holding hydropower operations responsible for environmental repercussions will help the world realize the long-term economic benefits of hydropower while protecting the earth’s precious ecological resources.